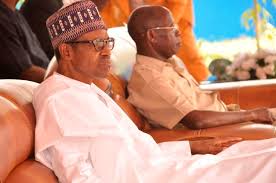 The APC national chairman, Adams Oshiomhole, might have landed in hot water.
President Muhammadu Buhari, contrary to initial report, was aware of his party man’s ordeal in the hand of the DSS.

Based on the allegations of bribery swirling around the chairman, Buhari has also ordered the DSS to further do their job.

Out of the country now, Oshiomhole might be arrested or invited for further interrogation as soon as he is back, according to sources within the Villa.

His trouble started when bad losers in the party’s primaries waged war against him, alleging he took bribes form members in some states.

Many of the party men in the southwest believe he was doing the bidding of their national leader Bola Tinubu.

Tinubu and some governors have made effort to save Oshiomhole from any embarrassment resulting from the primaries.

But Buhari  still wants the chairman to be investigated.

The DSS had intended to keep the investigation a secret affair, and send the report to the president when it wrapped it up.

Investigations showed that the interrogation of Oshiomhole was kept secret because the DSS believed it was a party matter.

“We are still looking at his statements and also carrying out further investigations. This type of operation is not meant for the members of the public,” the Punch quoted a source within the agency.

It appears there is little the DSS can do to keep a lid on this.

Other aggrieved members licking their wounds are poling up the pains for the chairman.

The Director-General of the Voice of Nigeria, Osita Okechukwu, who lost his senatorial bid, has also urged the DSS to probe Oshiomhole ’s call logs for the period the party’s primaries lasted.

According to him, the EFCC should also join the DSS in looking into the financial transactions made by the party chairman within the period under review.

Okechukwu said weeks ago, he joined the league of the APC moral leaders calling on Comrade Adams Oshiomhole to honourably resign forthwith as the chairmanship of the party.

“In his usual narcissistic disposition, he refused,” he told newsmen at conference in the party’s headquarters in Abuja Thursday.

“I, therefore, once again stridently call on Comrade Oshiomhole to instead of pontification, grandstanding and running away from the country, do the needful by honourably resigning the chairmanship of our great party.”