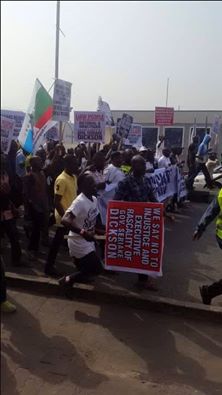 The All Progressives Congress (APC), this Wednesday, defied the order of the Inspector General of Police, Solomon Arase, banning public rallies and protests in Bayelsa State after the controversial governorship election.  Report reaching National Daily Wednesday afternoon indicates that APC supporters has taken over the streets of Yenagoa, Bayelsa State capital, protesting the decision of the Independent National Electoral Commission (INEC) to cancel the results of the supplementary governorship election in Southern Ijaw Local Government Area. The INEC had taken the decision on the reasons of violence, snatching of ballot boxes, other sensitive materials or massive irregularities during the Saturday, December 5 and the Sunday, December 6 supplementary polls in the local government.
The governorship election in Bayelsa State was declared inconclusive following the cancellation of the results in Southern Ijaw LGA after results of the other seven local government areas have been announced. INEC is to fix new date for completion.
The results from the seven local governments announced so far indicate that Governor Seriake Dickson, candidate of the Peoples Democratic Party (PDP), won in six local governments and has clear winning margin in the overall result while Timipre Sylva, candidate of the APC, won in only one local government.
Southern Ijaw Local Government Area is the political domain of the deputy governorship candidate of the APC as well as the APC Chairman in the state. It is also the political home of the Speaker of Bayelsa State House of Assembly. The local government has a voting population of 120,000, according to INEC records.
The mass protest is still in progress as at the time of filing this report.

Share this on WhatsApp
Related Topics:APC defies Police orderembarks on massive protest in Yenagoa
Up Next

Armsgate: Dasuki, Yuguda, Dokpesi, Bafarawa, others might be arraigned today