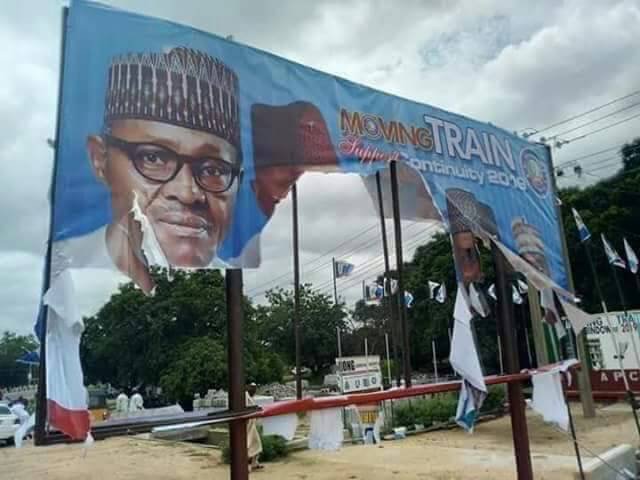 The women’s wing of the All Progressives Congress (APC) in Adamawa
State is protesting the destruction of billboards of President
Muhammadu Buhari and Governor Jibrilla Bindow erected during the 2019
general elections campaigns.
The APC women emphasized that they were shocked that President
Buhari’s billboards could be destroyed while those of the PDP
Presidential candidate, Atiku Abubakar, were erected in strategic
areas across the state. The women were said to have called on the
security agencies in the state to be more proactive before the
situation degenerates to civil unrest.
APC leaders in Adamawa State also expressed worries over the emerging
political violence in the state. They demanded the security agencies
to arrest perpetrators of the act while urging their members to remain
law abiding.
However, the State Peoples Democratic Party (PDP) has distanced itself
from the destruction of the billboards. The State Chairman, Shehu
Tahir also joined the call on relevant security authorities to arrest
perpetrators of the act. PDP leaders in the state further condemned
the illegal activities.