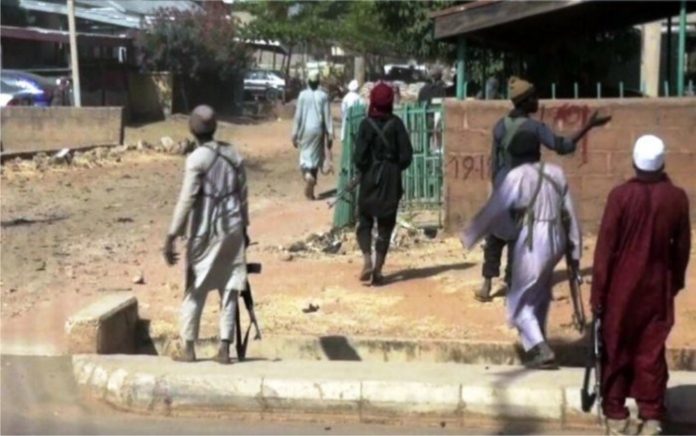 Rampaging bandits attacked Madamai and Abun communities in Kaura LGA of Kaduna state on Sunday, killing 34 residents, destroying about 20 houses and leaving many others injured.

Michael Magaji, a priest in the Catholic diocese of Kafanchan, confirmed the incident on Monday.

He said the affected communities are about five kilometres away from Kafanchan.

The priest said the bandits shot sporadically in the air during the attack, adding that most of the victims are women and children.

“I am in the hospital as I speak with you. We have brought 32 corpses for embalmment,” he said.

“We have eight people injured and they are receiving treatment. About 20 houses were burnt, 13 persons from the same family were killed. We intend to have a mass burial to call the attention of the world to what is happening to our people.”

“The troops mobilized to the location and also came under fire, before forcing the assailants to withdraw after an intense exchange,” he said in a statement.

“As of the time of this update, 34 residents have been confirmed dead following the attack. Seven others sustained injuries, and were rushed to a hospital in Plateau State.

“Governor El-Rufai has stated that the Kaduna State Government will bear the full cost of injured victims’ treatment.

READ ALSO: Casualties as bandits attack military base in Sokoto

“The Governor ordered an urgent assessment of the area by the Kaduna State Emergency Management Agency, towards the provision of succor to the affected households.”

The commissioner added that the governor described the attack as an “unspeakable display of wickedness”.

He said two suspects are being questioned in connection with the attack.

Danjuma La’ah, the senator representing Southern Kaduna senatorial district, appealed to residents of the area to remain calm and avoid taking the law into their hands.

La’ah called on the authorities to beef up security in the area to avoid further attacks and destruction of lives and property.

He warned that if the government refuses to take proactive measures to address the issue, the people will be left with no option other than to embark on self-defence.