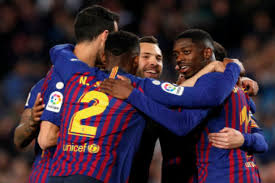 Share this on WhatsApp
Spread the love
Barcelona is back on top of the La Liga table. And it seems that position has been locked down for the Spanish champions who has had a dominating 10-year-era.
A late goal from former Barcelona man Cristian Tello earned Real Betis a 2-1 victory over Real Madrid on Sunday night at the Estadio Benito Villamarin.
Sidnei gave the Andalusian hosts a first-half lead with a powerful strike, only to see Karim Benzema level for the visitors from the spot right before half-time. In the end though, an error from Benzema led to Tello’s winning goal, thus handing back top spot in the LaLiga table to the Betis forward’s former club.
There were several notable inclusions in Zinedine Zidane’s starting XI, including both Eder Militao and Marcelo in defence, while Lucas Vazquez came in for Fede Valverde as the Frenchman reverted back to a 4-3-3.
Fresh off his impressive display in El Clasico against Barcelona, Vinicius Junior came out looking confident and had Real Madrid’s first look at goal with a near-post effort.
Betis were having difficulty getting into the flow of things, but a golden opportunity arose shortly before the half-hour when a free-kick hit the heads of Sergio Ramos and Raphael Varane before falling right to Betis defender Marc Barta alone in front of goal, but the former Barcelona centre-back somehow headed over the crossbar.
Betis were growing into the game and Real Madrid goalkeeper Thibaut Courtois was called into action to prevent an opening goal from Fekir, who wickedly hit a volley that forced the Belgian shot-stopper into a big save.
Yet there was nothing Courtois could do to stop an absolute hammer-blow from Sidnei that broke the deadlock. Real Madrid failed to clear their lines after a corner kick and a loose ball fell to Sidnei, who blazed a right-footer past Courtois for a 1-0 lead.
Sidnei would go from hero to villain minutes later though, as his attempt to clear a deep cross saw him clip Marcelo in front of goal, resulting in a penalty. Benzema stepped up and calmly converted the spot-kick to make it a 1-1 affair at half-time.
Betis regrouped during interval and came out strong in the second half, and they should have regained the lead through Joaquin Sanchez on a counter-attack. However, the veteran midfielder spoiled the chance and opted to find a teammate, instead passing straight to Luka Modric after rounding Courtois.
Zidane was first to go to his bench, taking off Marcelo and bringing on Ferland Mendy and then later introducing Clasico goalscorer Mariano Diaz for Toni Kroos. The changes improved Los Blancos, and after a stinging shot from Modric that required a save from Joel Robles, Mendy hit the crossbar with an effort.
Each side was keen to find a winner in the final quarter-hour, with Real Madrid owning more of the ball while Betis showed a threat on the counter. Zidane’s last roll of the dice then saw Fede Valverde called on to replace Modric.
Real Madrid had been playing with fire all night long with mistakes in their own half, and an ill-advised pass from Benzema was picked off by Andres Guardado, leading to a break that allowed Tello to finish with aplomb past Courtois to earn Betis a late 2-1 lead.
Real Madrid came with everything in search of the equaliser, but with the help of the Estadio Bento Villamarin in full voice, Betis held on to secure the three points.
Match Sheet:
2.- Real Betis: Joel; Emerson, Bartra, Sidnei, Alex Moreno (Pedraza, min. 77); Edgar (Guido Rodriguez, min. 73), Guardado, Canales; Joaquin (Tello, min. 66), Loren, Fekir.
1.- Real Madrid: Courtois; Militao, Varane, Sergio Ramos, Marcelo (Mendy, min. 59); Modric (Fede Valverde, min. 79), Casemiro, Kroos (Mariano, min. 69); Lucas, Benzema, Vinicius.
Goals: 1-0, min. 40: Sidnei; 1-1, min. 45+3: Benzema (p); 2-1, min. 82: Tello.
Referee: Gonzalez Gonzalez (Castilla y Leon).
Yellow cards: Marcelo (Min. 55) for Real Madrid, Guardado (Min. 74) for Betis.
Red cards: None.
Share this on WhatsApp
Related Topics:FC BarcelonaLa Liga
Up Next

One trophy Manchester United is winning over Manchester City and Liverpool