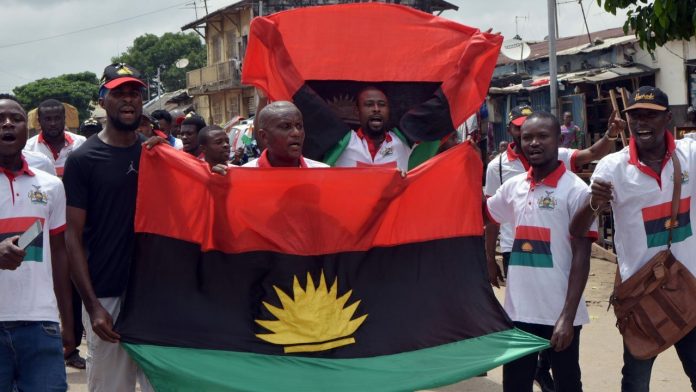 The Biafran Supreme Military Council of Administration (BSMCA) has expressed obsession over the January 15 annual Armed Force Remembrance Day anniversary observed by the Nigerian government. The Supreme Military Council in a statement by the Head of Provinces, General Innocent N. Orji; Media Adviser, BSMCA/BNG, Comrade Chima Onyekachi; PRO BSMCA/BNG, SSG. Christiana Areh challenged the Nigerian government occupying the Biafran territory in the southeast. They asserted the rights of indigenous people of an entity and the right to self determination as guaranteed by United Nations treaty.

The Biafran Supreme Military Council of Administration (BSMCA) declared that “United Nations Declaration on the Rights of Indigenous Peoples in its Article 3 states: “Indigenous peoples have the right to self-determination. By virtue of that right, they freely determine their political status and freely pursue their economic, social and cultural development.”

The BSMCA observed that annually, the occupying Nigerian government and its armed forces on January 15th, commemorate the ‘Armed Forces Day’ to celebrate their servicemen and women who died while serving their country but neglect the Biafran veterans killed in the Nigerian Civil War which ended on January 15, 1970. The Biafran Supreme Military Council of Administration (BSMCA), identified to be coordinating the Biafra Provincial Government (BPG), accordingly, protested: “…what about those Biafrans who died gallantly during the Biafran Genocide of 1967-70?”

BSMCA argued that the then occupying Head of State, General Yakubu Gowon, after receiving the surrender letter from former Biafran Vice President, Philip Effiong, declared that there are “no Victor and no Vanquished”; “but it is  clear the Biafran servicemen and women have all been vanquished from history books, since 1970 till date none of them are mentioned during the memorial services.”

BSMCA recalled that the Buhari administration promised to begin payment of the pensions and gratuity of Biafra veterans but nothing has been done about that; stating that, though, the BSMCA does not care about such because it is known to be fallacy.

The Biafran Supreme Military Council of Administration declared: “The actions and activities of the occupying Nigerian government against the heroic Biafran veterans can only be described as humiliation and vengeful.

The Council, as a matter of fact, is warning those individuals, groups or organisations campaigning against the disintegration of Nigeria that they shall be met with severe force.

“The disrespect and dishonour to our veterans is a clear indication of the hatred and ethnic bigot of the Fulani-controlled Nigerian State against Indigenous Biafrans.

“The Biafran National Guard (BNG) has been ordained by the heavens and the peoples to correct the misfortune perpetrated against the peoples of Biafra and that shall be done accordingly.”

BSMCA assured all Biafran veterans that the payment of their pensions and gratuity is guaranteed after the total self-defence of their sovereignty.

They urged the war veterans “to steadfastly pray and support the Biafran National Guard as we have embarked on the protection of lives and properties of Indigenous Biafrans, including the self-defence of our borders and territories.”

The Biafran Supreme Military Council of Administration further declared: “The Council is using this medium to advise defunct Governor Dave Umahi to wake up from his Fulani induced hallucination.

“Dave Umahi has gotten himself drunk in the feudal cup of the Fulani Oligarchy that he has forgotten where he originated from.

“We want to remind the boot licking governor that he may have forgotten his father told him he is from the East where the Sun rises every day of his life.

“The peoples of former Eastern Nigeria who are also known as the peoples of Biafra are not deceived by the utterances of Dave Umahi who has definitely spoken like a man lacking judgement and blinded by political ambition.”

The Council acknowledged that Dave Umahi has the freedom of expression to choose for himself alone, but not for the whole people of defunct Ebonyi State in their choice of sovereignty or marginalization.

The Council, therefore, declared: “every province of defunct Ebonyi is a territory of Biafra and there is no argument about that.”