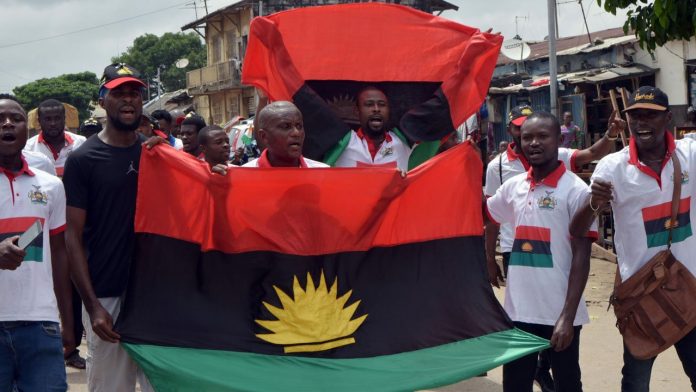 The Biafran Supreme Military Council {BSMCA} led by General Innocent N. Orji, on Tuesday threatened that in exercising the Right to Self-determination as affirmed by international laws, the Council will be declaring the sovereign State of Biafra on 30th October, 2021, as adopted by the United Nations Declaration on the Rights of Indigenous Peoples in its Article 4, which reads: “Indigenous peoples, in exercising their right to self-determination, have the right to autonomy or self-government in matters relating to their internal and local affairs, as well as ways and means for financing their autonomous functions.”

The Biafra National Guard in a statement by the Spokesperson, Comrade Agwu Francis, notified the global community, the European Union (EU), African Union (AU), United Nations (UN), United States Of America (USA), United Kingdom (UK), Arab League (AL), the Commonwealth of Nations, ECOWAS, and the occupying state of Nigeria, that the deadline of May 30th 2021 announced by BNG for the unconditional release and acquittal of all prisoners of conscience held for over 15 years in the Onitsha and Awka prisons, respectively, is not an empty threat but bears the consequences of the nullification of the proposed 6th November 2021 governorship election in the defunct Anambra State.

The list included the leader of the Indigenous People of Biafra (IPOB), Mazi Nnamdi Kanu and Benjanmin Onwuka.

The Biafra National Guard argued: “according to the Constitution of the Federal Republic of Nigeria 1999, Section 36(1), “In the determination of his civil rights and obligations, including any question or determination by or against any government or authority, a person shall be entitled to a fair hearing within a reasonable time by a court or other tribunal established by law and constituted in such a manner as to secure its independence and impartiality.”

The group protested that the occupying Nigeria government has purposely failed to respect their own constitution in regard to the above named persons.

Comrade Agwu Francis declared: “the Council in solemnity has agreed to deploy the Biafran Army, Biafran Navy, Biafran Air Force and Biafran Detective Force to enforce the nullification of any form of occupying Nigeria government proposed election in any part of Biafran territories beginning from defunct Anambra State irrespective of thousands of occupying security forces or military hardware deployed against the peoples of Biafra.

The Biafran National Guard, therefore, called on “all allies and lovers of freedom to brace up for the forthcoming live broadcast direct from their National Headquarters in Nsukka Province on 27-30 October 2021.”

The group further declared: “Again, we demand for the unconditional release and acquittal of every Biafran prisoners of conscience held by the occupying Nigeria government.

“We want to remind doubters to go make more researches and findings about our precedents in the struggle for the restoration of our sovereignty beginning from the era of Ralph Uwazuruike non-violence approach when we hoisted the Biafran national flag on 22nd May 2000 at NO.175 Faulks Road Aba, Abia State.

“Former Nigerian President Olusegun Obasanjo and former Inspector General of Police, Mike Okiro, can give a better account of our past activities.

“This time, BNG shall mount a guard of honour and raise our flag of our independence, guarding  it in whatever way deem possible, not excluding self-defence as acknowledged by international charters and conventions.

“This is to inform all that this era is no longer the chapter of Uwazuruike but a new flag that shall be jealously guarded with blood and sweat even if it requires the destruction of every parts of Nigeria.”

The Council argued that the right to self-determination cannot be denied to Indigenous Biafrans but at the same time be accorded to the people of Western Sahara by occupying Nigerian President Muhammadu Buhari.

The Council reiterated that the restoration of the Sovereign State of Biafra is sacrosanct as stated by Article 6 of the United Nations Declaration of the Rights of Indigenous People which states that “Every Indigenous individual has the right to a nationality.”