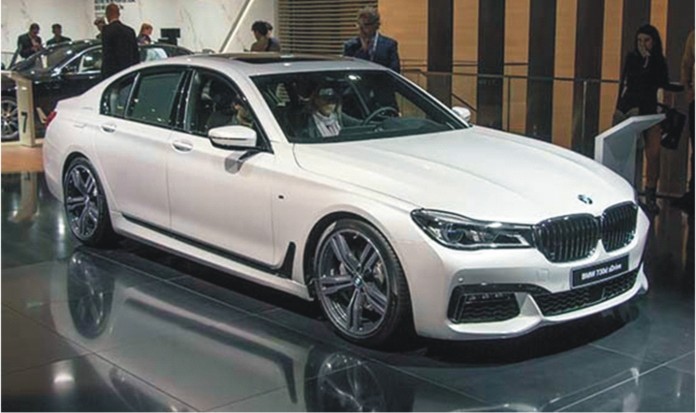 BMW has made its intention to build a BMW M7, though the company just added the V12 flagship model to its new BMW 7 Series range, known as the BMW M760Li xDrive. Ever since BMW re-introduced the V12 engine into its cars with the BMW 750iL in the 1980s, a V12 has formed the pinnacle pick of the BMW 7 Series, as BMW’s biggest sedan car.

The M prefix is along the lines of the M235i, where M Performance sits somewhere between the standard BMWs and the BMW M cars. 760Li retains the known nomenclature, indicating its top status. xDrive shows that rear-wheel-drive is no longer enough for the big-power BMW, changing to an all-wheel-traction setup

BMW says the 6.6 V12 turbo is also made to be as fuel-efficient as possible and has auto stop-start, giving 12.6 litres per 100km and 294 g/km. 8-speed Steptronic Sport transmission is standard, and uses a gear-change strategyassisted by navigation data.

Competitors with the same fierce performance and long big bodies with luxurious interiors are the Mercedes-AMG S65 L and Porsche Panamera turbo S.

While Mercedes-AMG offers the 4Matic all-wheel-drive in their V8 63-badged cars (like the Mercedes-AMG CLS63 S 4Matic and Mercedes-AMG S63 4Matic) the S65 with its 463kW and massive 1000Nm torque drives through the rear wheels, restricting its ability to put in a time quicker than its 4.3 seconds 0-100.

The Porsche Panamera turbo S uses a 419kW/800Nm V8 turbo and 4-wheel-grip to launch in 3.8 seconds (the long wheelbase Panamera Executive is not available for the SA market), so the M760Li xDrive with its time of 3.7 sec is built to just beat the fastest big Porsche, though the 7 is bigger.

The only other 12-cylinder cars with all-wheel drive are the Audi A8 L 6.3 quattro and the Bentley Flying Spur W12, but neither performs like this new M760Li.