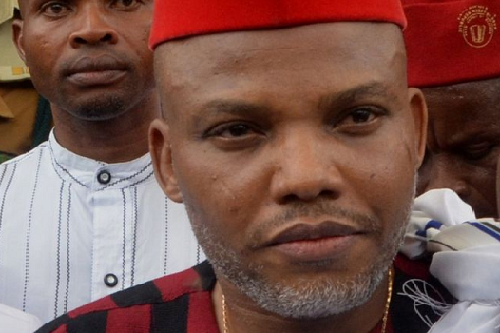 Share this on WhatsApp
Spread the love
The five governors of the south-east states are in a parley with the leader of Indigenous People of Biafra, IPOB, Namdi Kanu.
Holding  at the Enugu governor’s lodge, the meeting is meant to address the call by the the separatist leader to people to boycott the November guber election in the state.
Ebony Governor Chief Press Secretary Emmanuel Uzor posted this on his Facebook page on
Wednesday.
ALSO SEE: Finally, Diezani Alison-Madueke loses N7.6 bn to FG
Kanu is meeting with the governors for the first time since his release from detention early in the year.
Reports have it that the federal government is planning to re-arrest him because he has violated his bail conditions–of not holding public rallies, not being in a crowd of more than 10, among others.
Share this on WhatsApp
Related Topics:Biafra AgitatorIndigenous People of Biafra (IPOB)Namdi Kanusoutheast governor
Up Next