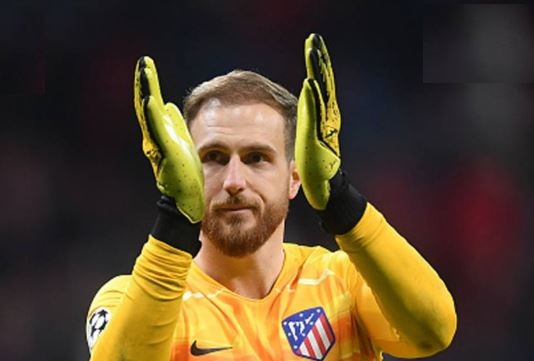 There have been previous indications that Frank Lampard and Chelsea are reportedly losing faith in their No. 1 goalie Kepa Arrizabalaga despite the huge financial involvement in bringing the Spaniard to Stamford Bridge from Athletic Bilbao in a world record transfer fee of £71.6m.

The Stamford Bridge club have been rumoured to have shown interest in series top goal keepers with the likes of Manchester United Dean Henderson who is on loan at Sheffield United and Ajax shot stopper Andre Onana.

Meanwhile, report reaching National Daily has revealed that the Blues have directed their interest towards Atletico Madrid No. 1 Jan Oblak in their bid to heavily strengthen their goal keeping position.

And the reaction emanating from the boss at Wanda Metropolitano club suggests that   Diego Simeone could be sanctioning the move of Oblak to the North London club to the delight of Chelsea fans obviously.

It is reported that Simeone is “not surprised” to hear of Chelsea’s interest in his goalkeeper Jan Oblak and team captain and did not rule out selling the player National Daily can confirm.

The Slovenian potential move to Stamford Bridge could appear to be an offer which many may deem to be unattractive for Atletico, but strangely and surprisingly Simeone failed to issue a hands-off warning when asked about Oblak by Cadena SER.

Simeone speaking Cadena SER maintained that: “It is normal that they want a goalkeeper of the characteristics and value that Oblak has and it doesn’t surprise me because he is very good.

“For us, he is decisive, very important in the dressing room, he is our captain.

“Year after year he has managed to evolve in all the matches, from goalkeeper to his handling with the group, and hopefully he can continue with us.

“It is normal to always look for the best, and we have many who are very good, some previous seasons have left, others have stayed, and it is logical and normal for a footballer like Oblak to be loved by anyone.

“For us, he is our captain, an important player year after year and hopefully we can continue to count on his work, which is enormous for Atlético de Madrid.”

Expectedly, the Blues fans are excited with the fact that Simeone has not specifically ruled out the sale of the player leaving them optimistic in the ability of their North London club to complete the incredible transfer of player plus cash for the 27-year old Slovenian to Stamford Bridge.