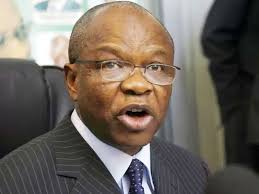 Former Chairman of the Independent National Electoral Commission (INEC), Prof. Maurice M. Iwu, has cried out from his Ikoyi Prisons detention cell that President Muhammadu Buhari is allegedly persecuting him because of his support for Atiku Abubakar, the presidential candidate of the Peoples Democratic Party (PDP) in the 2019 general elections. Iwu is being prosecuted by the Economic and Financial Crimes Commission (EFCC) on corruption allegation of N1.23 billion misappropriation. The EFCC alleged that – Iwu, between December 2014 and March 27, 2015 – “aided the concealment of N1.23 billion in the account of Bio-resources Institute of Nigeria Limited with number 1018603119, domiciled in the United Bank for Africa.” The former INEC chairman taking solace in spiritism, noted that he is not being prosecuted for the period he was INEC chairman, assuring Nigerians and the international community that he will expose his experiences in the hands of the government while in detention.
National Daily learned that Iwu had narrated: “the journey I have found myself on began brewing on February 23rd, 2019 when I was deprived of my civic duty of voting in the Presidential Election as a result of EFCC “investigations”.
“From the seizure of my international passport that February till this recent ordeal with actual charges and detention, God’s goodness has remained manifest as I recite “Te Deum” in Thanksgiving.”
There was the innuendo that Iwu was appointed INEC consultant to Atiku during the 2019 general elections. It was also alleged that his ‘boys’ in INEC played crucial roles in information flow in the commission, including the server controversy.
Iwu had expressed gratitude to Nigerians who he acknowledged did not crucify him before trail in court. “I thank Nigerians both at home and in the Diaspora for their enormous show of concern, support and the spiritual discipline (for not crucifying me before my day in the court of law). “My gratitude to Ndi Igbo, umu Imo, Okigwe indigenes (both at home and abroad), clergy from various denominations, especially, of the Catholic faith, which I belong to…” Iwu was cited to have declared; adding “Though I ask the same question Ps. 4:2a stated “How long, Oh men will you turn my glory into shame?”
“Whenever persecution comes my way, I become more aware that God does not forsake His own indeed, and I’m encouraged by Ps. 34:19
“Many are the afflictions of the righteous: but the LORD delivereth him out of them all.”
He had maintained: ‘Even with a spirit charged by the timeless words of Rudyard Kipling in his timeless poem “If” (1943).
“More than ever before, with what I have passed through within the last months, I embrace the ever reassuring grace and presence of the Holy spirit, which affords my soul to appreciate the professionalism and dignity of many of the staff and persons at the EFCC detention centre, Judiciary and the Ikoyi prisons…
“With a humble spirit, I plead for well meaning Nigerians to await the court trial and due process in this matter that would allow me to share my side of the story and equally bring to light the testimonies of this journey of immense grace and revelation.
“It is noteworthy, that none of the charges against me has to do with my tenure as Chairman of INEC.”
He appealed to the scientific community: “please be assured that this would not negatively affect the several ongoing works by Bioresources Institute of Nigeria (BION) in contributing to the discovery and development of phytomedicines for tropical and emergent diseases, and the use of our world-class research facility for the standardization of African Medicinal Plants.”
Meanwhile, Iwu is being arraigned at the Federal high Court, Ikoyi, Lagos, by EFCC over N1.23 billion corruption allegation and remanded at the Ikoyi Prisons.
In the four count charges at the Federal High Court in Ikoyi, Lagos, the EFCC said that Iwu purportedly committed the offence in the build-up to the 2015 general elections which was won by President Muhammadu Buhari of the All Progressives Congress (APC).
The EFCC had narrated that Iwu between December 2014 and March 27, 2015, “Aided the concealment of N1.23 billion in the account of Bio-resources Institute of Nigeria Limited with number 1018603119, domiciled in the United Bank for Africa;” arguing that Iwu, “Ought to have reasonably known that the N1.23 billion formed part of proceeds of an unlawful act, to wit: fraud.”
EFCC prosecuting counsel, Rotimi Oyedepo, had acquainted the court that Iwu acted contrary to sections 18(a) and 15 (2) (a) of the Money Laundering ((Prohibition) Act 2011 and was liable to be punished under Section 15(3) of the same Act.
Iwu had pleaded not guilty to the charges.