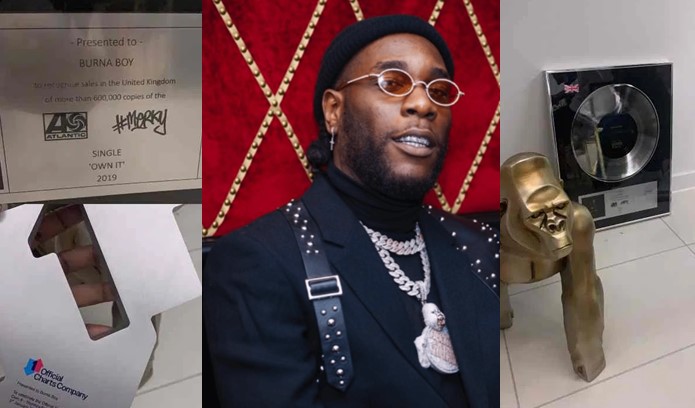 Share this on WhatsApp
Spread the love
Singer and songwriter, Burna Boy has continue his great achievement to the year as he receives a platinum plague for appearing in Stormzy’s hit single, “Own It”.
The award winning singer who was featured in the hit song alongside Ed Sheeran was appreciated for his contribution in the song.
Burna Boy took to his Twitter handle to flaunt the new award to his millions of fans who are delighted at his latest achievement.
The “Gbona” crooner showed fans why he’s often regarded as one of the best to have grace the game.
The new recognition come at a time when Burna Boy is being criticised for making some statements about his past in the entertainmemt industry.
Accordingly to Burna Boy, nobody has the right to say they paved way for him except, Fela Kuti and his family members.
This has generated a lot of tension on social media who tend to disagree with him, however he has continue to break barriers.
Share this on WhatsApp