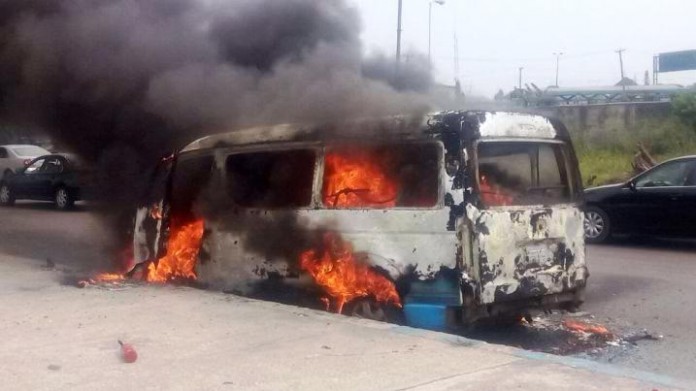 19 passengers of Delta City Transport Scheme, popularly called “Uduaghan Bus”, on Monday escaped death when an 18-seater Hiace Bus they were travelling with suddenly caught fire soon after it took off from the bus terminus in Delta state.

National Daily gathered that the incident happened about 2pm when the bus suddenly caught fire few minutes after taken-off.

The bus was said to have taken off from the park by PTI Juction, Effurun area and was heading to Ozoro also in Delta state when the incident occurred.

A witness explained that the fire started from the engine and the driver was immediately alerted. Attempts to put out the fire failed as the bus was consumed.

It was further learnt that efforts made by passengers to combat the fire failed as the fire extinguisher in the bus didn’t work as it was said to have expired since 2016.

While some of the passengers thanked God for sparing their lives, other grieve over the loss of their personal belongings.