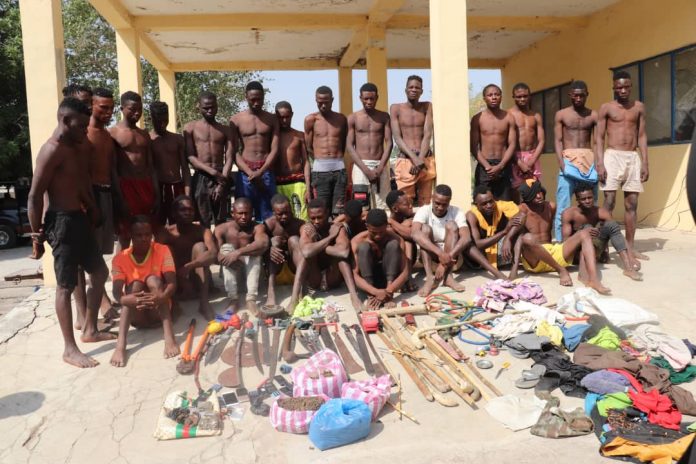 No fewer than 23 youths have been arrested by the Niger State Police command for offences ranging from hooliganism to attacks and breaches of the peace in Minna.

Kuryas explained how a joint team of security personnel launched an aggressive raid and a house-to-house search that led to  the arrest of the 28 in Unguwar-Biri, Bosso local government area of the state.

He said the operation will be sustained in order to fish out all the undesirable elements and street urchins until the metropolis is totally rid of criminals.

The items recovered from the suspects include ten arrows, seven cutlasses, eight knives, nine sticks, five shisha pipes, one woodcutter, one  axe, one iron rod, one iron cutter, one scissors, one fry wheel, two screw-drivers, 13 handsets, 17 sachets and 4 nylon of Indian-hemp, assorted charms and some clothes and slippers.

“All suspects are under investigation in SCID, Minna and will also be arraigned in court for prosecution as soon investigations are concluded,” he said.