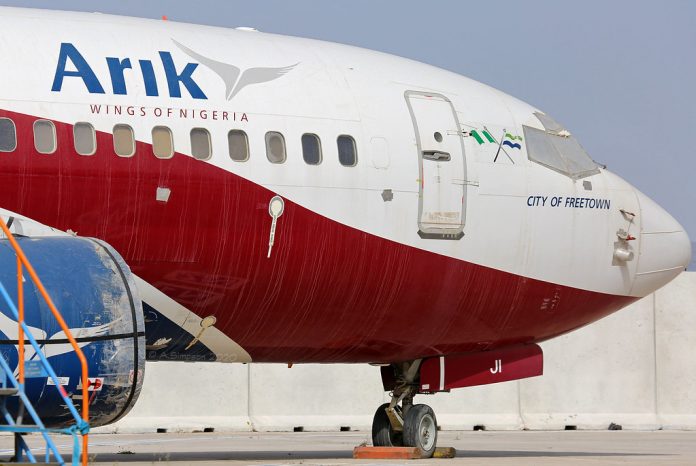 The FMS is an on-board multi-purpose navigation, performance and aircraft operations computer designed to provide virtual data and operational harmony between closed and open elements associated with a flight from pre-engine start and take-off, to landing and engine shutdown.

The FMC, according to aviation experts, is worth hundreds of thousands of United States dollars.

Reliable sources at the airport and Arik Air confirmed that the incident happened between 11:00pm on Wednesday night to 7:00am on Thursday, January 20, 2022 at the Domestic Terminal II.

The thieves did not only vanish with the FMC but also tampered with the pilot static cover and other sensitive parts of the aircraft, making it impossible for the aircraft to be flown.

According to experts, the act could have only been carried out by persons with aircraft technical skills.

“It is impossible for a novice to have successfully removed the FMC, that thing was stolen by an expert,” one aviation source said.

The aircraft was leased to Arik by Eznis Airways LLC, an airline based in Ulaanbaatar, Mongolia.

Authorities have since suspended flights on every of the aircrafts leased by the Mongolian company.

Breach of security at the Murtala Muhammed International Airport continues to raise concerns among citizens and major stakeholders in the sector.

There had been reports of security breaches at the car park in recent times with vehicles parked at the facility reportedly vandalized.

It was also discovered that security screeners deployed by the Federal Airport Authority of Nigeria to MMA Terminal Two are not certified by the National Civil Aviation Authority to carry out the screening.