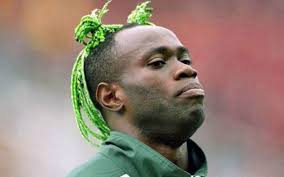 Former Super Eagles player  and  Pastor Taribo West, one of the best defenders Nigeria ever had,  spoke with National Daily Esther Egbe recently.  He believes the Eagles will soar in Russia and Coach Rohr is doing a great job.

What do you think about our present Super Eagles?

I think we have a great team altogether. They play collective, everyone fights together. When you are on team you do anything to stay united.Everybody in a team has got to play  their role to achieve a common goal.A team is made up of different individuals, but  they have their collective responsibility. I believe in our players .

How can you rate Super Eagles Coach?

The coach is an experienced man who can handle the team.He can fix in players that can give us  good results. Rohr is good at his job. With the few years he has worked with the team,there has been great change.He has eyes for quality players and has also discovered new talents for Super Eagles

Nigeria is set for her sixth participation in the World Cup. You were there on two occasions; 1998 and 2002. How do you see this present team?

This new coach has coached other African national teams and coming to Nigeria was a good advantage for him and he was able to work through the process.If you notice, this team did not have a standout individual but they all worked together as a team. The only player with a bit of creativity was Moses. If there is a bit of consistency by allowing the coach and giving enough time, I think these people will take the Nigerian pride where it used to be.

How did you feel when they secured the World Cup ticket in that game against Zambia?

I was happy for them. It is their time and football is a generational thing. I knew beforehand that the game would end up 1-0. The Zambian team—I watched their youth team at the last youth competition and most of them have been transferred to the senior team. They are very energetic, strong and ready to run. Most of them play professional football in European countries, so I knew it was going to be a tough task. We had established players already and some experimental players that could be marked out of the game. You will notice that in the first half we were having issues because they also came all out to win but at the end of the day, our boys were able to take the home advantage. The coach was also very sensitive in reading the match and he brought in Iwobi and in 20 minutes he brought changes to the game. At the end of the day he scored for Nigeria.

What has Rohr done differentlyl for the Super Eagles compared to his predecessors?

One of the things Gernot Rohr has been able to overcome that has made him better than his predecessor is keeping the team united. He also brought the love and the oneness to play for one another. Keshi brought that in the early stage but they lost it later.It gives a lot of advantage and edge over their opponents. Secondly this team, if you watch them, improves with every game. If you are consistent with them, they can become champions.

Is there any similarity in this present Super Eagles set up and the one you played for years back?

I think the similarity is coming. On the field I can’t see a similarity because then we had a number of individual players who were outstanding.The similarity I can see now is the love, the oneness, the unity. When you have a team like that it will be very difficult to beat. A sign that a team is united can be seen on the bench. When a goal is scored everyone on the bench rises up to celebrate.That is a team that epitomizes oneness. Such a team can surprise the world any day, any time. If they can incorporate discipline in their work, they will surprise not only Africa but also the rest of the world.

You were  an  expert in the defense for the Super Eagles in your playing days. How can you rate  the new-found partnership between William Troost-Ekong and Leon Balogun?

I share the same sentiments with you because the chemistry of the “Oyinbo Oyinbo” in the back four is beginning to work. Balogun has been outstanding in the last two or three games .They are both doing a great job.