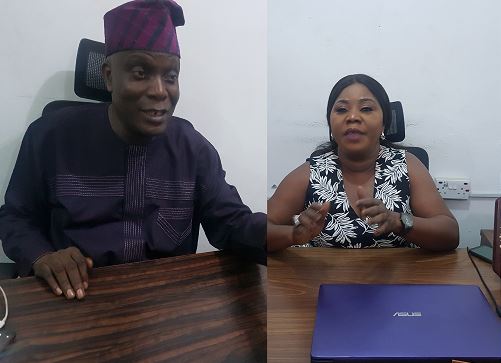 Share this on WhatsApp
By Olanrewaju Adesanya
Stakeholders in the popular Computer Village,located in the heart of Ikeja have narrated the oddities in the market,stating their readiness to collaborate with the local government to ensure peace and also boost economic value of the area.
The Babaoja,Mr.Adeniyi Olasoji, who was also the former CDA chairman of Ogunbiyi community Development Association (CDA),alleged to have sponsored the people who beat up one of the CDA member on Sunday in a recent chat with newsmen indicted Hon. Osundairo as the one who caused the Sunday brawl.
“He (Osundairo) should have called me to know if I am aware of the boys activities before harassing them.
“He knows these guys are specially constituted task force ensuring security and welfare in the market,and being youthful,the exuberance is still part of them why would he descend so low to the level of arguing with them as an elderly person,whatever happened to the guy is his making.
Olasoji hinted that he has ensured harmony in Computer Village without unnecessarily heaping the burden on traders and that the supposed CDA is non existent again by the Lagos State government decision.
He notes that the assault was needless as Hon.Osundairo ought not to have stopped those working on the street being young men.
“He is also indicted the police for releasing the arrested guy,when the police did there investigation and find nothing against the guy why won’t they release him?
“On the allegation that I refused to hand over to the new CDA chairman, who am I handing over to, is it the CDA that has been proscribed?
“I have been appointed as the BabaOja and we have Iyaloja, we are responsible for the market now,this place is a market,it can’t be under CDA.
“I think you will need to get  further clarification from the ministry of local government and community affairs,we have written a letter to the ministry.
“After the dissolution of the CDA’s by the state government,they later found out having carried out their investigation here that 95 per cent of this place is for business owners (market) and 5 per cent residential.
“So they said this place does not deserve a CDA because already they have a government of the market board that is running affairs of this community.
He notes that the community is ready to work with the local government Chairman to jerk up Internally Generated Revenue (IGR) making the collection seamless in the market.
Also speaking Mrs Abisola Azeez-Isokpehi the Iyaloja Computer Village,notes that historically there was never a time in history when CDA ran the market,it was rather run by a joint committee.
She notes that peace is an integral factor for the market to work so they are giving that a chance.
She however call on the Ikeja council boss to consider them,stating unequivocally that they are prepared to cooperate with for the economic furtherance of Ikeja as a whole.
It would be recalled that a report alleged that constituted authorities in the market were disregarded,with respect to the erection of signage within the place.
Those erecting the billboard were said to have been reprimanded by one of the CDA member,a landlord Hon.Lanre Osundairo and a fight broke out,consequently he was reported to have been assaulted along with one Mr Kunle Adiomowo.
Hon. Osundairo alleged that the peace of the community is being threatened by some people “who consistute themselves as the authority in the  business environment”, doing whatever they like without recourse to the Community Development Association in the name of Iyaloja/Babaoja of computer village.
Share this on WhatsApp