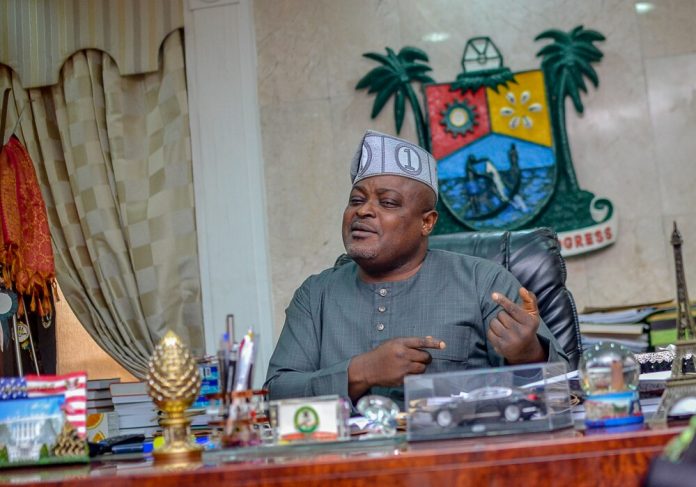 The Lagos State House of Assembly, Speaker Rt. Hon. Mudashiru Obasa has revealed the intendment of those labelling him with corruption allegations through SaharaReporters, describing it as a ploy by his detractors to drag him down by all means.
Obasa who appeared before the 9-man Fact Finding Adhoc Committee of the House headed by Hon. Victor Akande (Ojo Constituency 1) on Saturday 6th June, hinted that most of the expenditures of the house had the unanimous concurrence of all.
Responding to questions from members of the Committee, Obasa stated that all the allegations made by SaharaReporters in its reports were unfounded.
The Speaker stressed that the vehicles bought for the members of the House and other expenses made by the House were done with the approval of the House and that of the Fund Management Committee (FMC) of the House headed by him takes care of approvals of expenditures  above N100m,his own approval limit.
“We bought Land Cruisers for Principal Officers of the House. The cars we buy for Principal Officers are always higher than those of other members and we followed the due process in the purchase.
“We went through the Public Procurement Agency (PPA) and others and the vehicles were distributed appropriately.
“It was agreed at the parliamentary meetings on about four occasions and the Clerk of the House is the Secretary.
“Also, it is not true that my wife collects N10 Million monthly from the House. Anyone who says she does should come with proofs and evidences.
“My approval limit as the Speaker of the House is N100 million. Anything above that would have to be approved by the Fund Management Committee. On Prado Jeep that we bought for the members, we followed the due process like we did in that of the Principal Officers,” he said.
Obasa also debunked an allegation that N258  million was spent for the printing of invitation cards for the inauguration of the 9th Assembly.
He stressed that the whole event cost N61 Million and that  N1.1 Million was spent to print the invitation cards.
“It is not possible to spend N258 Million to print invitation cards. We are not involved in such a frivolous expenditure,” he added.
On the expenditure of N80 Million as estacode for the training of women in Dubai, the Speaker said that wives of 20 lawmakers attended the event and that he was there to declare the event open.
“We gave N4 Million to each of the participants for air ticket, hotels, feedings and local travel.
“Air ticket to Dubai alone is about N2 million. Some of these allegations were raised for a crusade to get the Speaker out of office.
“The House of Assembly is above common standard of excellence and we have to train people, and this comes with a cost. Learning is not cheap and I have never collected N80 Million for estacode at a go before,” he said.
Defending the purchase of eight Hiace buses for committee works in the Assembly, Speaker Obasa said that it was discovered that the House was spending a lot of money to repair vehicles, which he said was why the House decided to buy the brand new buses and that the buses were there for everybody to see with documents to defend the purchases.
The Speaker also denied the allegation that he spent N53 Million for a trip to the United States of America with his mistress.
“We were invited by the Consular General for a programme in the United States. Later, the programme was postponed,  but I had gone ahead. I had to return home and I told others not to bother to come until the postponed dates.
Obasa told the committee that it was not possible for him to spend N17 Million for cleaning of his guest house as against the allegation made by SaharaReporters.
“They only remove documents and fly them around to please themselves. All our payments go through certain procedures.
“The expenditure had been there before I became the Speaker. There was no way I could have spent N17 Million on cleaning my guest house.
“On the issue of awarding contracts to companies belonging to me, they should come and show evidence of where I awarded contracts to myself,” he said.

On the report that he tricked former governor Akinwunmi Ambode of the state to spend N350 Million for hosting a meeting of Conference of Speakers, Obasa said told the committee that this was not possible.
He maintained that such was not possible since Ambode is an accountant, who rose to be the Chief Accountant of the State.
“There was no way I could have tricked Ambode to release such money anyhow. We had a meeting of the Conference of Speakers, who came with three members each and we had subcommittees who were given N2 million each.
“We paid for the tickets of each Speaker, we pay for their hotel accommodation, feeding and souvenirs.
“We also provided local transportation for them. All these allegations are deliberate actions of my enemies to achieve their aims that they could not achieve in the House to remove me as the Speaker of the House, which was why they came up with such reports.
“On N60 Million spent for social influencers, I did not sign such money. I don’t even know the companies they are talking about. The BVN they are flying about is not correct.
“Whatever I have done as a Speaker, all the approvals I gave as Speaker were given based on collective approval of the members of the House,” he said.
The Deputy Speaker of the House, Rt. Hon. Wasiu Eshinlokun-Sanni, who also appeared before the panel denied attending meeting in Dubai as against the report of Sahara Reporters.
Also speaking, Chairman of the House Committee on Information and Strategy, Hon. Tunde Braimoh, said that while a media parley was held by the House, he didn’t know how much was spent on the event since different people handled different aspects of the event.
“We provided hospitality for the few people that came. The event involved other things, there were catering and others that were given to other people to handle.
“It is most uncharitable to say we spent N47.5 Million for social media influencers. We spend money on publicity and public relations.
“We have programmes that we pay for on TVC and LTV 8. We have a magazine that we produce and we print 40,000 copies quarterly and distribute to schools and other places and we pay for the content, design and production,” he said.
The Clerk of the House, Mr. Azeez Sanni also defended the  estacode for the trip to the United States of America, saying that it followed the standard procedure, and that the programme was budgeted for under conferences and seminars.
“We did not buy 11 buses, we bought eight Hiace buses for committee assignments.
“The cost exceeded N100 Million and it was approved by the Management Committee of the House. It was also approved by the Public Procurement Agency and the Ministerial Tenders Board and we got a Certificate of Compliance for the purchase.
“The buses are in place at the car park. We have budgetary provision for the vehicles.
“The women trip to Dubai was also approved for in the budget. The Speaker was there, the wife of the Deputy Speaker was there and wives of 17 other lawmakers. Each participant got money for air fare, local transportation and others,” he said.
Sanni also cleared the air on N258  Million for printing of invitation card, saying that the money for the whole event was N61 Million and that only N1.1 million was spent for the printing of the programme for the event.
He confirmed that 80 cars were bought in 11 months for the 8th and 9th assemblies.
“We bought 40 Corolla Cars back-up vehicles for the 8th Assembly.
“The purchase was approved by the Management Committee led by the Speaker with Hon. Olumuyiwa Jimoh, Saka Fafunmi, Hon. David Setonji and others as members.
“In the 9th Assembly, we bought Toyota Prado for members and this was approved by the Funds Management Committee headed by the Speaker.
“The issue of the vehicle was discussed at the various parliamentary meetings and it was unanimously agreed by the members.
“We bought 36 Prado Jeeps for members and it went through the PPA and we have Compliance Certificate for the purchase.
“We also bought six Land Cruisers for the Principal Officers approved by the FMC and PPA with Certificate of Compliance.
“On women empowerment programmes. We raised a submission for the programme and it was recognised by the Assembly budget. It was not paid into the account of the wife of the Speaker. The facility manager has no relationship with the Speaker of the House,” he said.
The Clerk of the House, however said that some documents might have been released to Sahara Reporters “through some disgruntled staffers of the House.
“We have been taking steps on that and we have transferred some staff.
“The files go through many tables and there is no doubt that some devilish staffers took pictures of some of these documents and send to these people.
“The staff have taken oaths and this attracts dismissal. Unofficial disclosure of information attracts dismissal in the civil service,” he stated.
Two officials of Zenith Bank;  Mr. John Olorundare, Chief Compliance Officer,Zonal Head of  Alausa, Mr. Sanni Idowu Awe also appeared before the panel.
The bank officials stated that an individual could only have one BVN.
They confirmed that different account names could not be used for one BVN and that Speaker Obasa had only six accounts with Zenith Bank.
According to them, only two of the accounts are operational; one savings and the other current account, while the other four are dormant.
Present at the meeting were other members of the committee including Hon. Yinka Ogundimu (Agege 2), Hon. Gbolahan Yishawu (Eti Osa 2),  Hon. Lukmon Olumoh (Ajeromi Ifelodun 1)  and Hon. Ajani Owolabi (Lagos Mainland 1).
Others are Hon. Mojisola Alli-Macaulay (Amuwo Odofin 1), Hon. Rotimi Olowo (Shomolu 1) and Hon. Akeem Shokunle (Oshodi/Isolo 1).