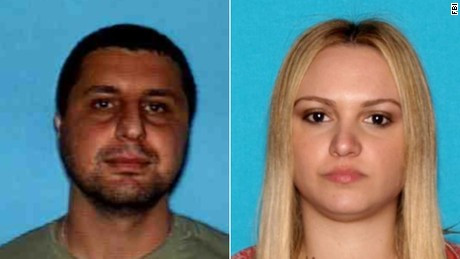 Richard Ayvazyan and his wife, Marietta Terabelian, were facing prison time for their role in a massive covid-19 relief fraud scheme when they cut off their electronic tracking bracelets and fled their California home, abandoning their three teenage children.

Not only did they flee their home but they left a note for their three kids aged 13, 15 and 16, the FBI has revealed.

“We will be together again one day,” it read, according to Ayvazyan’s attorney.

“This is not a goodbye but a brief break from each other.”

The FBI has announced that they are still looking for the couple, 3 months after they ran away in August 2021.

Prosecutors said they and others carried out a scheme to steal more than $20 million in relief funds intended for small businesses during the pandemic.

The couple and Ayvazyan’s brother, Artur Ayvazyan, 41, were found guilty of conspiracy to commit bank fraud, wire fraud and money laundering at a trial in June. Richard Ayvazyan and his brother were also convicted of aggravated identity theft.

According to court documents and evidence presented at trial, they used fake or stolen identities including the names of dead people and foreign exchange students who briefly visited the US years ago — to submit fraudulent applications for approximately 150 federal pandemic relief loans for sham businesses in San Fernando Valley.

To support the fraudulent loan applications, they submitted fake identity documents along with falsified tax forms and payroll records to lenders and the Small Business Administration, federal prosecutors said.

The couple, along with Ayvazyan’s brother and five co-conspirators, used the money to buy mansions in three Southern California cities — Tarzana, Glendale and Palm Desert — along with gold coins, diamonds, furniture, luxury watches and a Harley-Davidson motorcycle, prosecutors said.

“The defendants used the COVID-19 crisis to steal millions of dollars in much-needed government aid intended for people and businesses suffering from the economic effects of the worst pandemic in a century,” said US Attorney Tracy L. Wilkison.

Despite the couple being on the run it didn’t stop a judge this week from sentencing Ayvazyan, 43, and Terabelian, 37, in absentia to 17 and six years in prison, respectively.

“When our nation was at its most vulnerable, these individuals thought only about lining their own pockets,” said Ryan L. Korner, a special agent in the IRS’s Criminal Investigation Office, after this week’s sentencing.

“These sentences reflect the seriousness of these crimes.”

The couple’s three children were in the courtroom to witness their parents and uncle being sentenced.

As at press time, November 19, the FBI is offering a $20,000 reward for information leading to their arrest.