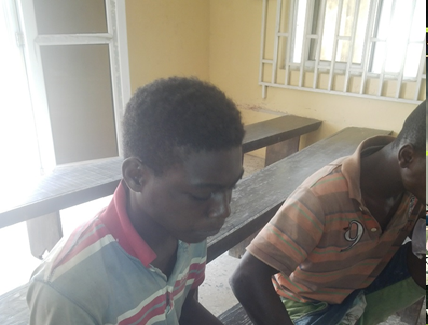 The accused according to a statement from BEDC, were convicted by a Magistrate Court, Koko near Sapele area of Delta state for vandalizing a BEDC 33KVA line.

The accused who were jailed without any option of fine were arrested and detained on Monday 19th, December at Koko Divisional Police Station for committing the crime after cutting the wire of a tower in Presco Palm oil plantation situated in Koko town.

They were reported to have cut the 50mm earthing wire for grounding channel iron on 33kva line, in addition to 12 towers also vandalized by the criminals before they were arrested. These vandals were caught by the customers and community members in the area.

While under detention at the Koko Police Station, one of the convicted vandals, Friday Tega attempted escape by breaking the toilet ceiling but was re-arrested after a search that lasted about an hour.

They were arraigned before the Koko Magistrate Court on 2 counts of conspiracy and stealing for both of the vandals, while the second accused Friday Tega who attempted escape was tried on another 2 counts for attempted escape and malicious damage to property.

According to the magistrate, all terms were however to run concurrently at Sapele prisons where they will serve their jail terms.

The activities of vandals on electricity distribution network continues to be a major act negatively affecting power service delivery to customers. BEDC has commended the vigilance and commitment of those who helped in arresting the vandals as well the swift way the police and the court has dealt with the issue.

It is expected that the action taken on such misdemeanors will be a deterrent who conduct similar acts.

Share this on WhatsApp
Related Topics:Benin Electricity Distribution Plc. (BEDC)ElectricityVandals
Up Next