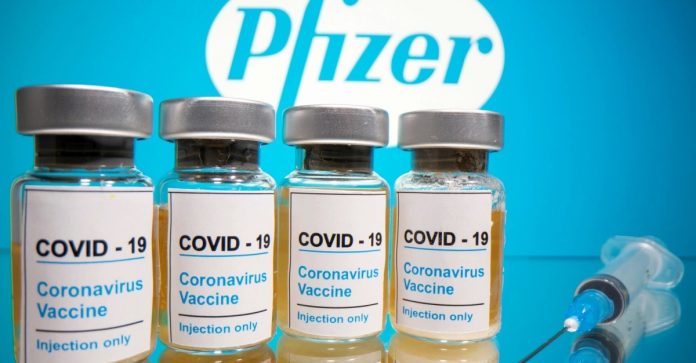 Vaccine makers Pfizer and Moderna are projected to generate combined sales of $93.2 billion in 2022 nearly twice the amount they’re expected to rake in this year, said Airfinity, a health data analytics group.

Bringing to fore the fact that pharmaceutical companies are prioritizing their own profits by enforcing their monopolies and selling their vaccines to the highest bidder.

Airfinity put total market sales for COVID vaccines in 2022 at $124 billion, according to the Financial Times.

Pfizer vaccine sales are predicted to reach $54.5 billion in 2022, and Moderna’s will hit $38.7 billion. The estimates blow the earlier figures — $23.6 billion for Pfizer and $20 billion for Moderna — out of the water.

Sales of the mRNA shots will continue to rise in 2022 due to boosters and countries stockpiling to ward off variants, Airfinity said.

In April, Pfizer predicted 2021 COVID vaccine sales of $26 billion. After second-quarter results were reported, Pfizer upped the figure to $33.5 billion. Bernstein analyst Ronny Gal said the company could ring up an additional $10 billion in vaccine sales in 2021.

“The numbers are going to be much higher. The guidance of $33.5B reflects contracts signed to today which reflect total commitment to sell 2.1 million doses (at average price of $15.95). Pfizer notes they expect to manufacture 3 million doses. Presumably much of those will be sold as well, albeit at lower average price as consumption shifts to emerging markets. This is probably another $10 billion.”

According to ActionAid International — a global federation working for a world free of poverty and injustice — Moderna, Pfizer and BioNTech are reaping “astronomical and unconscionable profits” due to their monopolies of mRNA COVID vaccines.

Thanks to patent monopolies for COVID vaccines — development of which was supported by $100 billion in public funding from taxpayers in the U.S., Germany and other countries — the three corporations earned more than $26 billion in revenue in the first half of the year, at least two-thirds of it as pure profit for Moderna and BioNTech.

The Alliance also estimated the three corporations are over-charging, pricing their vaccines by as much as $41 billion above the estimated cost of production.

Silverman said pharmaceutical companies are prioritizing their own profits by enforcing their monopolies and selling their vaccines to the highest bidder. “Enough is enough — we must start putting people before profits,” Silverman said.

Despite benefiting from a multi-billion-dollar public investment in the development of their vaccines, pharma giants have not paid their fair share of taxes, ActionAid International reported.

BioNTech, the German startup that produced the recipe for Pfizer’s vaccine, paid a significantly higher tax rate of 31% in Germany while reaping a 77% profit margin.

Johnson & Johnson (J&J) said it made $502 million in sales from its COVID vaccine in the third quarter, according to an earnings report released Tuesday.

My days of playing full time golf are over – Tiger Woods