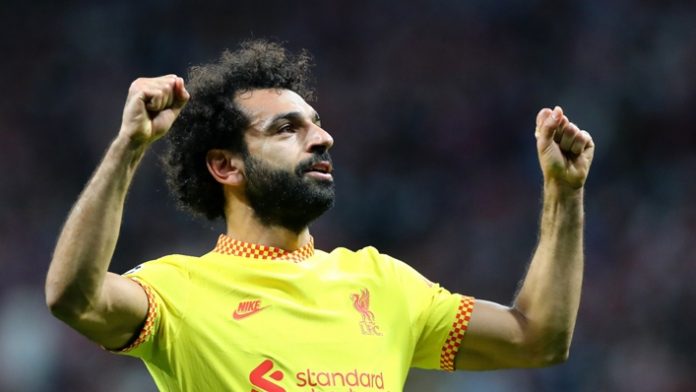 Mohamed Salah made history by scoring in a ninth successive match for Liverpool to earn the Reds a dramatic 3-2 win over Atletico Madrid, who had two-goal Antoine Griezmann sent off and a late penalty contentiously overturned.

That was the earliest Atletico had gone two goals down in a Champions League match, though they hit back before half-time through Griezmann’s double.

Griezmann was sent off early in the second half for a high boot on Roberto Firmino and Liverpool made the man advantage count when Salah scored a second of his own from the penalty spot.

Liverpool, who were given a late reprieve when a penalty awarded for Diogo Jota’s shove on Jose Gimenez was overruled following a check of the pitchside monitor, now hold a five-point lead over Atletico and Porto at the top of Group B.

At 29 years and 130 days, Liverpool fielded their oldest starting line-up in a match since September 1953 and their experience showed in a fast start that saw them open the scoring early on.

Salah’s left-footed shot from outside the box took a deflection on its way past Jan Oblak and was later credited to the Egypt forward after some initial confusion over who the final touch came off.

Atleti continued to be pushed back and they found themselves two goals behind soon after when Felipe’s poor defensive header fell nicely for Keita to thump home with a dipping first-time shot from 18 yards.

But the home side soon settled and were back in the game thanks to a slight touch from Griezmann to help Koke’s shot into the bottom-left corner, the goal allowed to stand after a lengthy VAR check for a possible offside in the build-up.

Griezmann was then denied by Alisson when played clean through on goal, but the France international made amends by taking Joao Felix’s pass in his stride and coolly slotting past the Liverpool goalkeeper.

Alisson and Oblak continued to be called into action in a frantic end-to-end match, but momentum shifted back in Liverpool’s favour with 52 minutes played with Griezmann’s straight red card.

Jurgen Klopp’s side made a spell of pressure count 12 minutes from time as Mario Hermoso barged into Jota inside the box and Salah, who missed a penalty against Milan in Liverpool’s opening group match, buried the spot-kick.

There was still time for more drama in the Spanish capital, with referee Daniel Siebert pointing to the spot for Jota’s challenge on Gimenez, but the decision was controversially overturned before substitute Luis Suarez could step up and take the penalty.

Antoine Griezmann is the first player in UEFA Champions League history to score twice and be sent off. Comedown.