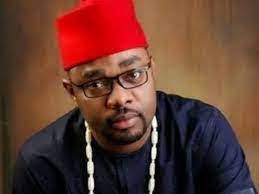 The Peoples Democratic Party (PDP) in Imo has condemned  the violent attack carried out at the residence of  Ikenga Ugochinyere, the party’s candidate for Ideato Federal Constituency and the Spokesman of Conference of Coalition of United Political Parties (CUPP). The PDP State Publicity Secretary, Collins Opurozor, in a statement on Sunday in Owerri, noted that the perpetrators carried out “bloody” on the party’s candidate.
Opurozor stated that heavily armed motorcade of three vehicles invaded Ugochinyere’s residence in Akokwa on Saturday and inflicted mayhem, leaving three persons dead.
“Among them was an uncle to Ugochinyere.
“However, our candidate escaped death by the whisker.
“At least thirty-two vehicles were burnt to ashes, while buildings were leveled to the ground with explosives.
“It was a horrible scene of a warfare,” Opurozor stated.
He further alleged that Ugochinyere’s ordeal began when he exposed the widespread compromise of the INEC voter register.
He expressed worry that in spite of the series of reported threats to the candidate’s life, no arrest was made.
“It is noteworthy that protection of lives and property is the sacred responsibility of government.
“The security agencies are supposed to be non-partisan and act without fear or favour. We are deeply worried.
“Consequently, as law abiding citizens, we call on the security agencies to rise to the occasion and immediately investigate the attack and bring the perpetrators to book,” Opurozor stated.
He urged all lovers of democracy in the state “not to be cowed by the evil agenda of these forces of darkness, whose sole objective is to destroy our dear state.
“Imo PDP will in the coming days review the situation and take further lawful steps to guarantee the security of the lives of our candidates, leaders, members and Imo citizens at large,” he added.