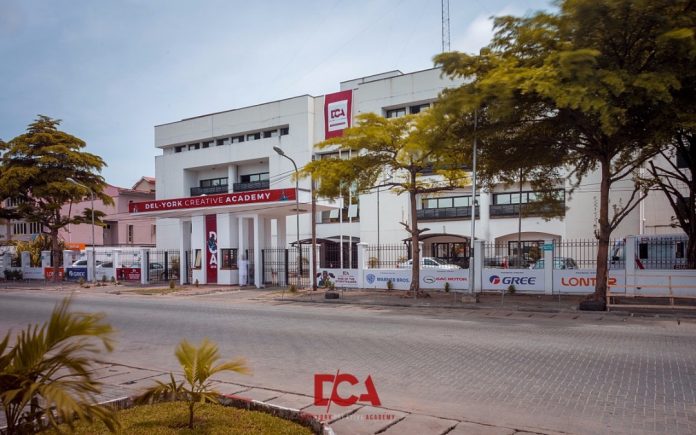 Founder of the Del-York Creative Academy (DCA), Africa’s premier filmmaking and media training hub, Linus Idahosa and his wife, Actress Stephanie Linus alongside DCA lecturers, DCA-US Representatives and the local Del-York team, the Metropolitan Senior Pastor (MSP) of the House on the Rock (HOTR) Church, Pastor Paul Adefarasin and wife, Ifeanyi all cheered graduating students of the Del-York program at the Intercontinental Hotels. This season’s program started May 10 and ended June 10.
Before the graduation ceremony, at the House On The Rock sitting conference room, Adefarasin appreciated the unrivaled and noble efforts of the academy in training African creative talents.
The lecturers revealed the month-long training has been impactful with DCA students eager and committed to changing the African narrative through storytelling.
They stated they were honoured to be in Nigeria building the African Creative Industry in partnership with the Del-York Creative Academy.
While commending Idahosa for his world-class investment in African talents, Adefarasin celebrated the prolific DCA lecturers for “sacrificing their time in a bid to better invest in the Nigerian Media and Filmmaking Industry.”
He assured the academy’s training will greatly impact the African creative industry and improve the African storytelling culture.
He and his wife explained the significance of names and proceeded to give all the DCA lecturers native names.
ALSO READ: Del-York creative academy set to re-skill Africa’s creative industry
They presented the team with several tomes on Nigerian heritage and history (including the rich Benin culture and the notable Benin Wall), which he said he hopes will fuel their desire for knowledge of the motherland and influence their artistry about this vast and rich Nation and the African Continent as a whole.
Adefarasin said he believes unequivocally that their visit will greatly impact and strengthen the creative industry in Nollywood, improve our storytelling culture and birth many productive partnerships.
ALSO READ: Pastor Paul hosts faculty of Del-York
You may recall that on the 21st of May, to  commemorate the African Day, United Bank for Africa (UBA) had an event that invited The Del-York Creative Academy. It was themed “Africa’s history redefined; our past, a path to the future”.
Linus Idahosa and his 25man team of the most prolific Hollywood Instructors from Del-York Creative Academy were on ground to be part of  the brilliant panel.
Moderated by legal practitioner, Ms. Ayo Obe, the panel featured the chairman of UBA Bank and Founder of Tony Elumelu Foundation, Mr. Tony Elumelu, Afrobeat Musician, Femi Kuti; Guinean historian and playwright, Professor Djibril Niane, Nobel Laureate, Professor Wole Soyinka, Politician, and daughter of late former President of Ghana, Ms. Samia Nkrumah. They called on Africans to be mindful of their rich history, which creates the path towards the socio-cultural, economic and political development of the continent.
“This is a representation of the awakening of Africa, a vision to change things for ourselves and seeing organizations of this magnitude coming together with a shared vision is a reminder of all we can achieve together”.