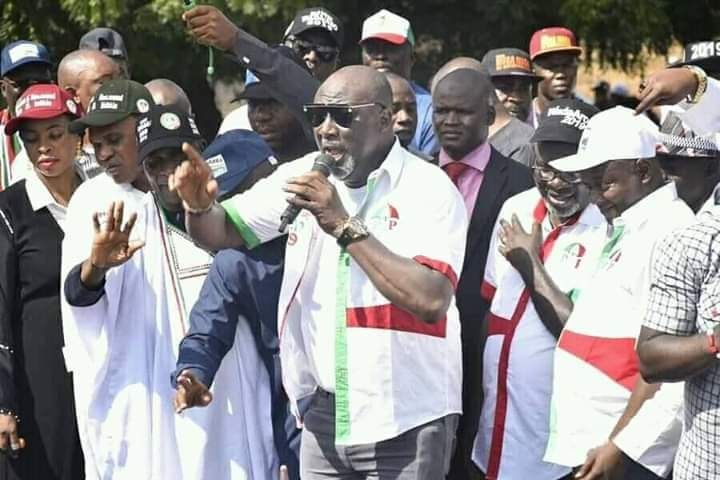 Senator Dino Melaye at a campaign rally for the November 16 governorship election in Kogi State, ridiculed Governor Yahaya Bello to the ignominy of the people of Kogi State. The Senator who is also contesting the Kogi West senatorial election on the platform of the Peoples Democratic Party (PDP) on November 16 against Smart Adeyemi of the All Progressives Congress (APC) and others, listed basic functions a state government must perform having been given the peoples mandate.

Melaye assured the people of the state of unusual development of Kogi State  and compulsory payment of salaries by the PDP governorship candidate, Engr. Wada. The senator listed several ways he is better than Governor Yahaya Bello to the excitement of the crowd.

Dino Melaye had declared: “I want to assure you the kind of development we have not seen before; salary payment is compulsory, paramount, mandatory and a must.

“All of una know Yahaya Bello, there is nothing wen I no take better pass am. I tall pass am; I fine pass am; I go school pass am. And if na that one – kere wa, kere wa – forget that one!”

The video trended widely on the social media at the weekend.

Dino Melaye is optimistic of victory in the November 16 senatorial election in Kogi State. He had earlier remarked that Governor Yahaya Bello and the APC will be battling with two lions in the elections, maintaining that they may only get down one but not the two lions.