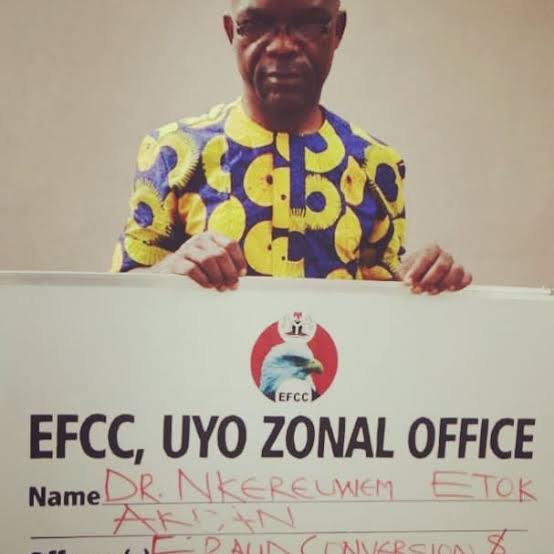 A Director in charge of Akwa Ibom state Agency for Control of AIDS, Dr. Nkereuwem Akpan Etok, was on Thursday arraigned by the Economic and Financial Crimes Commission (EFCC) on a 5-count charge bordering on abuse of office and money laundering.

The accuse who was arraigned before Justice A. A. Okeke of the Federal High Court sitting in Uyo, Akwa Ibom State, was said to have allegedly embezzled N30m (Thirty Million Naira), released to his agency in 2018, by the office of the Secretary to the State Government, SSG, Akwa Ibom State, for outreach, sensitization, HIV testing/counselling and purchase of screening and confirmatory test tie breaker

Investigations into the matter revealed that the accused used less than N6, 000, 000 for the purpose for which the N30, 000, 000 was released and diverted the rest of the funds for personal purposes.

One of the counts against the accused reads, “That you Dr. Nkereuwem Akpan Etok between 26th and 28th November, 2018 at Uyo within the jurisdiction of this Honourable Court, while being Director and Project Supervisor of Akwa Ibom State Agency for the Control of AIDS did convert a total sum of N24,700,200.00 (Twenty-four million, seven hundred thousand, two hundred naira only) knowing that the said fund is a proceed of your unlawful act and thereby committed an offence contrary to Section 15 (2) (a) of the Money Laundering (Prohibition) Act, 2011 (as amended)”.

He pleaded not guilty to the 5 counts.

In view of his plea, the prosecuting counsel, Adebayo Soares, prayed the court to remand the accused in prison and fix a date for trial.

The court then adjourned to October 16 and 17, 2019, and also ordered that the accused be remanded in prison custody.