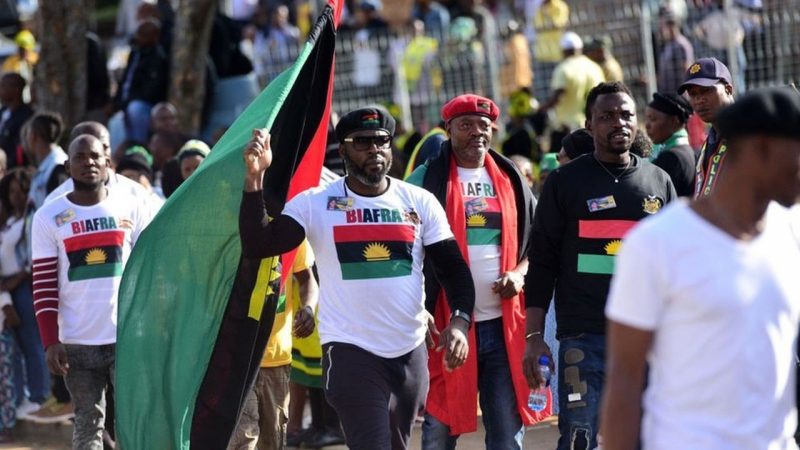 The Indigenous People of Biafra (IPOB) has urged its followers and residents of the South-East area to ignore the July 22 Sit-At-Home order issued by Simon Ekpa, a self-styled Nnamdi Kanu disciple.

The former Radio Biafra Director-General who is now the leader of a breakaway Biafra group, IPOB-Auto-Pilot, had, on Thursday, declared a sit-at-home order for Friday, to protest the killing of seven Igbo youths in Imo State last Sunday.

But in a response by IPOB’s Media and Publicity Secretary of the group, Emma Powerful, the Biafran agitators said the order should be disregarded as Ekpa is a fraudster who is out to scam the people for his benefit.

Powerful added that Ekpa’s major preoccupation since he was disgraced out of the group was being used by the Nigerian government to destroy IPOB.

Powerful also insisted that Ekpa was not a member of IPOB, hence should be disregarded by those sympathetic to the Biafran cause.

“The attention of the global movement and family of the Indigenous People of Biafra (IPOB) has been drawn to the laughable, disgraceful and unguarded statements credited to certain “Refugees interpreter” based in Finland whose name is Simon Ekpa through whom Nigeria Government and enemies of Biafra had successfully launched so many tragedies and attacks against our land and people.

“We do, hereby, strongly reiterate once again that Simon Ekpa is not IPOB member, not IPOB or Biafra spokesman, not a family member of IPOB in any family unit in Finland and has never remitted a dime from his monthly fundraising to Eastern Security Network (ESN).

“Every activity of the Finland-based blogger and scammer, Simon Ekpa is to scam and deprive ignorant Biafrans who genuinely wanted to support the only genuine ESN under IPOB-DOS command of funds and logistics so that Igbo land would be invaded by Fulani invaders.

“We, therefore, advise Simon Ekpa and his miserable sponsors not to continue hiding under the name IPOB, ESN and commit all manner of crimes.

FG to restore 1,416 hectares of mangrove in Ogoniland clean-up