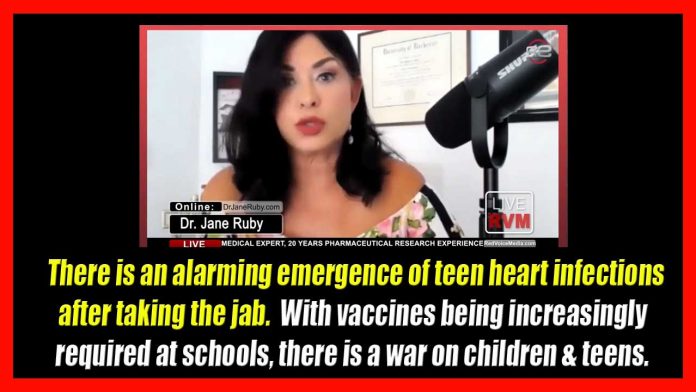 A group of Doctors and Scientists under the aegis of Corona Committee Conference has revealed that they have indisputable proof that any country which continues using the Coronavirus shots being called vaccines are complicit in crimes against humanity and premeditated murder.

The experts in the interview monitored by National Daily, are calling for a worldwide immediate halt of the vaccines, especially in children which they said are now targets of pharma companies.

One of the experts, Dr. Jean Ruby who revealed this in an interview said their findings are explosive, warning people not to take the vaccines because of the dangerous components.

“We have a consortium of those doctors worldwide now across the United States, UK, Germany, Austria, Japan, it’s just all coming together. They have looked collectively at hundreds I’m seeing hundreds, maybe 1000 or more vials of these injections across Pfizer, Maderna and AstraZeneca.

“And what they have found is shocking. Millions of sharp edge metal pieces in these we’re talking about just a droplet on a plate and they’re seeing hundreds of these sharp edge metal pieces they’re looking at they’re seeing parasite material, and stew the scary one of the scariest parts is that when they warmed the solution under the microscope, the particles started to move very quickly and move kind of in sync with each other.

“This is incredibly frightening. I’ve brought today to the show, a couple of photographs and a stunning video, which is really only a part of several hours of video brought forth by these researchers.

“Okay, they’ve taken one droplet, basically and looked at it under a regular microscope. We’re not talking about anything fancy here that no one else can replicate and many of them have replicated. What they’re seeing is sharp metal objects everywhere. They’ve had other experts verify that they’re seeing graphene layers, right everywhere, again, large structures in the form of rectangles.

“Let’s take a closer look at the still shots there’s one picture in particular that I’d like to start with, it’s actually a composite of four pictures. And if you look at the upper, the upper left hand corner, you see two structures actually, you see a very curly structure at the bottom, very luminescent. That is metal, metal, some kind of metal structure.

“They said they’re not biological, which means they’re inorganic, and they have no business, no business anywhere inside of a human body. Now the picture to the upper right looks like a little piece of glass or metal that is indeed a sharp metal piece.

“They said there are 1000s of these in just a droplet. In the lower left hand corner. They move very quickly. They’re moving all around. They look like they’re moving with some kind of intent toward each other and then away from each other.

“They definitely verify that those are metallic because of the way they’re reflecting light. And if you look very close to the long string, that thick band at the in the upper right hand corner, you’ll see just below it there’s a piece that looks like a small you know little that’s what he was talking about.

“This particular set of information that I’m presenting is from the other part of the press conference called undeclared components of COVID-19 Vax. It was held pathological in route linjen, Germany and as I said before, these doctors have seen this hundreds of times. They indicated they were not surprised to see this but that the world should be shocked. There are particles that are constantly moving. What we’re going to see on Monday is what this does when it’s inside your blood, and how your white cells your granulocytes and your lymphocytes react to these pieces. It’s incredibly frightening. Okay,” she added.

She reiterated that any government, any company, any entity right now, that carries on with this program, this jam program after today, after being made aware of this should be prosecuted for crimes against humanity.