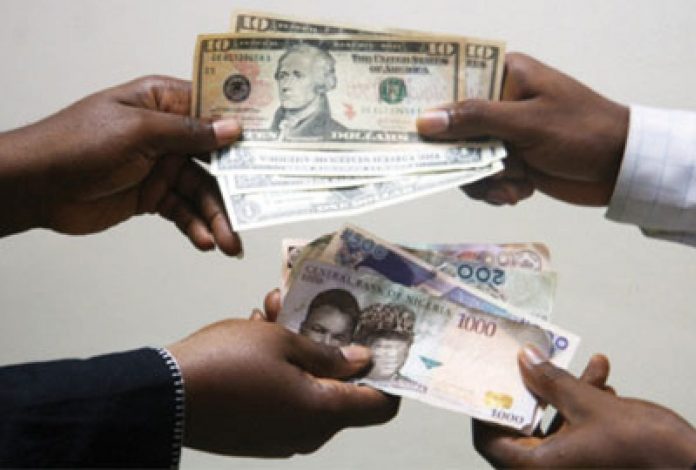 Share this on WhatsApp
Spread the love
Nigeria’s local currency gained massively in the black market on Monday, appreciating by N20 to exchange N550 per Dollar from N570 it exchanged for last Friday.
The big increase of the Naira in the black market on Monday comes just days after the Central Bank of Nigeria (CBN) accused abokiFX of being responsible for the naira’s slide versus the dollar on the parallel market (black market), according to this online news outlet.
AbokiFX is a digital portal that has been reporting on foreign exchange market moves since 2014.
Last Friday Naira was quoted at 570 to the dollar at the parallel market (black market) on the platform, though the CBN had described it as an illegitimate market.
READ ALSO: Naira starts week strong at official market
“The only exchange rate remains the I&E window, which is the market we expect everybody who wishes to procure or sell forex to get it,” Emefiele said.
“I am sorry to say that I do not, and I do not intend to recognise any fx in the market.
“Make a trip to your bank. Put your limit forward, even if it’s higher than what the bank is offering, and we’ll check into it. “Go to your bank and sell the dollar if you want to sell it.”
In the last two years, the apex bank has been examining the abokiFX website and its operators, according to Emefiele.
“We’ve been looking into abokiFX’s activity for the past two years,” he continued. “At one point, we encouraged our colleagues to phone abokiFX and inquire about how he handles the prices.
“He is a Nigerian living in England; we will trace him; we will track you, Mr Oniwinde; we cannot allow you to continue to destroy our economy.”
Reacting to the allegation, AbokiFX temporarily suspended rates on all its platforms, amidst an investigation by the Central Bank of Nigeria (CBN).
AbokiFX had announced the suspension in a social media statement on Friday evening, saying it “sincerely believes the suspension will lead to Naira appreciation beginning next week.”
“Abokifx has decided to temporarily cease rate updates on all of our platforms, effective today, September 17th, 2021, until we have a better understanding of the situation.
“Final rates were posted this evening, however the abokifx news site and crypto rates area will remain active,” they stated.
However, the Naira gained N20 against the dollar today, selling at N550 per dollar, down from N570 per dollar last Friday, just 72 hours after the fight between the CBN governor and AbokiFX.
The dip in the dollar and increase in the Naira, according to some Bureau De Change (BDC) operators who spoke on Monday morning when the Naira opened at N550 to the US dollar, had numerous causes.
“For the time being, we are selling at N550,” a BDC operator told our correspondent, adding, “By the end of the day, it might be higher or lower than this.”
Another BDC operator, who confirmed that the dollar to naira exchange rate opened at N550 per dollar today, said:
“There is a lot of uncertainty in the air right now because of the AbokiFX and CBN situation, so a lot of people are selling in the black market because they are afraid it will go back to the CBN official rate.”
Share this on WhatsApp