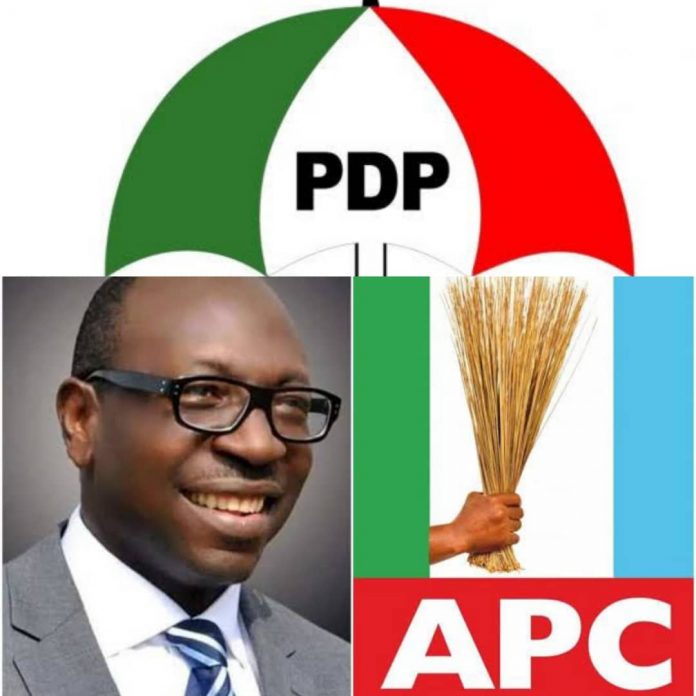 The fireworks between the rivalry political parties in the September 19 governorship election in Edo State has begun to garner momentum. The election umpires which include the Independent National Electoral Commission (INEC), the Nigeria Police, the army and other security agencies, are beginning to come into the picture of what the election contenders from the candidates to the partiers conceive of their roles in the governorship election. Meanwhile, a major threat to the Edo governorship election is the varieties of undistilled news on the electioneering process for ulterior motives and political marksmanship. Call it misleading fake news. However, containing or warding off blackmail has become the duty of all parties in protecting their candidates and political assets. Being on red alert over such responPeoples Democratic Party (PDP) sibility, the on Thursday dared the All Progressives Congress (APC) to rig the Edo governorship election and face the wrath of the people of the state.

The PDP in a statement by the National Publicity Secretary, Kola Ologbondiyan, mocked the APC, accusing the party of plotting to use fabrications in a section of the media to arm-twist the Independent National Electoral Commission (INEC) to manipulate the Edo State governorship election for their rejected candidate, Osagie Ize-Iyamu.

The PDP argued that “in sponsoring fake reports that PDP leaders were putting pressure on INEC Chairman, Prof. Yakubu Mahmood, on the Edo election, the APC has further exposed its hopelessness over their rejection by the Edo people and now seeks to blackmail the Commission.”

The PDP declared: “Whereas we understand APC’s despondency over the soaring popularity of our party and candidate, Governor Godwin Obaseki, the APC is worsening its  woes by sponsoring fabrications against the expressed will of the people of Edo State to re-elect Governor Obaseki in the September election.

“The APC, by now, should know that attempting to rig, by any way whatsoever, will surely be met with stiff resistance and dire consequences from the people.

“Our party counsels the APC to blame nobody but themselves for having a discredited nomination process and being stuck with a blighted candidate, who has now become a symbol of a direct affront by corrupt political godfathers and cabal to the will, ability and liberty of the people of Edo State to choose their own leader.”

The PDP maintained that the APC should blame themselves for presenting a candidate who was exposed by their party’s former National Chairman, Adams Oshiomhole, as a person of questionable character, a treasury looter, acid bather, rusticated student; a politician, who is only good for “night meetings” and unfit to hold office as governor of Edo State.

The PDP further declared that APC should also hold  Oshiomhole responsible for indicting its candidate as a “fake pastor” that started carrying the Holy Bible because he could not practice as a barrister.

the PDP highlighted: “It is, indeed, disgraceful that 73 days to the election, all the APC has to offer is blackmail against our leaders, after its plans to derail the election has been exposed.

“It is common knowledge among Nigerians that characters, such as ‘Gandollar’, the killers in the Kogi election as well as manipulators in the Imo election, being paraded by the APC as the face of their campaign in Edo State, were foisted into office through rigging, bloodletting and manipulation of election results.

“Nigerians already know how  the “Gandollar” election was driven by mercenaries from neighboring countries who disrupted electoral processes and inflicted injuries and pain on our compatriots.

“Nigerians can also recall how, in the Kogi election last year, gunmen and police helicopter were used to chase away voters, while an innocent woman, Salome Abuh, was killed by APC thugs in celebration of their bloodstained electoral conquest in the worst election in our political history as a nation.

“The public has not also forgotten how an individual, who came a distant fourth in the Imo state governorship election, suddenly became the winner.”

The PDP, therefore, noted that it is only a discredited and rejected party like the APC that will enlist the services of known election manipulators, who have now started their assignment by sponsoring fake reports, to run its campaign.

“Our party cautions the APC to desist from their plots to rig the Edo election as the people of Edo will firmly resist them. The APC should rather blame themselves for their woes and get ready to accept their inevitable crushing defeat at the poll.

“Furthermore, the PDP counsels INEC to note the dangerous plots of the APC and insulate itself from their shenanigans as the tide in this election is already clear for all to see,” the statement read.