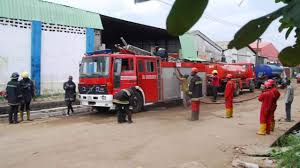 The Kwara Fire Service has put no fewer than 50 of its personnel on the alert to combat any fire outbreak that might happen during and after the Sallah celebration in any of the state’s 26 local government areas.

The Director of the State Fire Service, Mr. Falade Olumuyiwa, disclosed this in an interview in Ilorin on Monday.

He said that it was part of the service’s preparations for the state to enjoy a hitch-free festival.

According to him, no fewer than 50 of the Fire Service’s personnel have been deployed to its offices in Offa, Omu Aran, and Ilorin, the state capital.

“All our fire service stations are combat-ready to avert any outbreak of fire in any parts of the state as well as handle any other eventualities.’’

“Cooking process will increase from now. Residents must be vigilant with any cooking appliances they will be used to prevent fire outbreaks,” Falade said

“The aftermath of all crises always resulted into fire disaster in most cases.  Where two people are at loggerheads, one may decide to set the house of the other ablaze,” the director said.