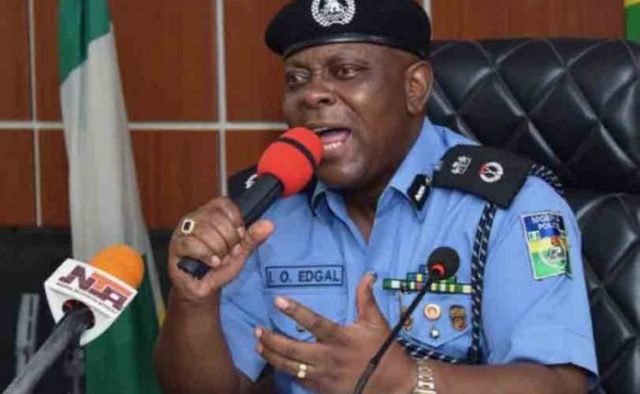 Share this on WhatsApp
Spread the love
The Lagos state police command says it has uncovered a printing press where election materials are being printed for the Ekiti state governorship election scheduled for July 14.
National Daily gathered that the raided company belonged to one Eniola Fayose and is located in Gbagada area of Lagos.
Imohimi Edgal, the state commissioner of police, had led some detectives to the printing press located at 13A and 13B, Oguntona Street, Gbagada area of the state, on Monday.
The police said it learnt from intelligence information that ballot papers meant for Saturday’s governorship poll in Ekiti state. Two persons were arrested when the police stormed the company.
National Daily gathered that among the items the police said were discovered at the printing press include a booklet of form belonging to Ekiti State Independent Electoral Commission (EKSIEC) as well as a copy of the state’s voter card register.
Briefing journalists after the raid, Edgal said: “On July 8, an intelligence report from a credible source was received by the command; that ballot papers meant for the forthcoming gubernatorial election in Ekiti were being printed in a company O’Naphtali Limited located at 13B Oguntona crescent, Gbagada, Lagos.

The report further revealed that some of the printed ballot papers were moved to Ekiti in three Hilux vans, on Friday July 6, while the art works are still in their graphic computers.

“Based on the report, I led a contingent of policemen to the location; to verify the information. At the scene, it was also discovered that the buildings are being used for general printing/ art work.”
The commissioner said a search warrant was executed on the premises and the following items were recovered: “One HP laptop, one Acer laptop, one booklet of form EC/ EK 8B Ekiti State Independent Electoral Commission (EKSIEC); three EKEC 50 A envelops for miscellaneous materials, two pieces of Ekiti SEC, eight A(1) statement of result, and one copy of form Ekiti SEC eight A(1).”
Others are “one income tax clearance certificate of Ekiti state, seven pieces of Ekiti state Internal revenue motor receipts, one piece of form EC 8A of Ekiti SEC, one piece of Ekiti state voter’s card register, log book cover for Ado local government” among others.

He added that preliminary investigations by the detectives showed the company is said to be in a contractual agreement with the Ekiti state Independent Electoral Commission “to print the elections materials found during the search.”

Share this on WhatsApp
Related Topics:Ekiti State Governorship electionrigging plots
Up Next

Yusuf , Adedapo to represent Nigeria  in weightlifting at AAYG in Algeria