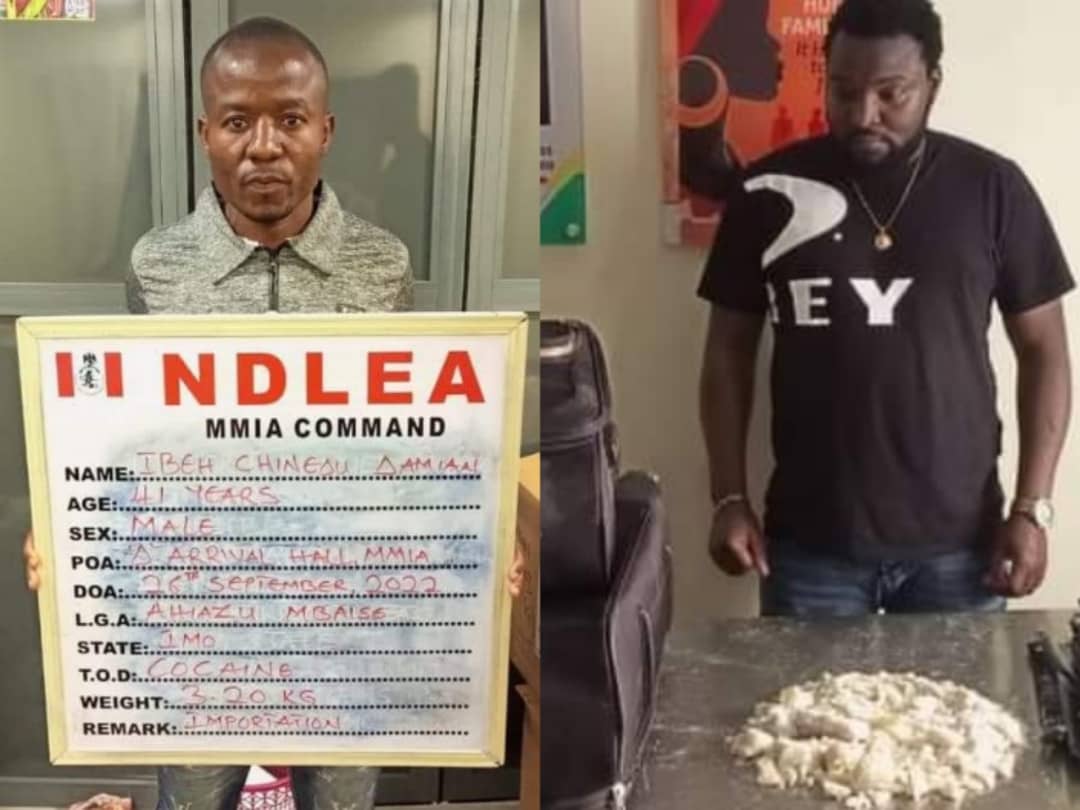 Okafor Emmanuel Junior, a former football player, has been apprehended by NDLEA agents at the Murtala Muhammed International Airport in Ikeja with 1.40kg of crack cocaine hidden in his suitcases.

He was arrested on his arrival from Sao Paulo, Brazil via an Ethiopian airlines flight.

The 33-year-old indigene of Arochukwu Local Government, Abia State was arrested on Monday 26th September 2022 after anti-narcotic officers discovered he concealed the illicit substance in the handles of his bags and padded the top edges of the same with the class A drug.

During a preliminary interview, Okafor disclosed that he was an ex-footballer with the University of Nigeria Teaching Hospital, UNTH Enugu FC, where he played for four seasons before leaving for Sri Lanka in 2014.

He further stated that he moved to Brazil from Sri Lanka after playing for two seasons but could not advance his football career in Brazil due lack of official documents.

In the same vein, an attempt by a 32-year-old businesswoman, Mrs. Pamela Odin to traffic 2.150kg tablets of rohypnol through the Nnamdi Azikiwe International Airport, NAIA, Abuja to Istanbul, Turkey was thwarted by NDLEA operatives.

The mother of one was arrested on Friday 23rd Sept. while attempting to board a Turkish airline flight with the drug concealed inside the pepper and packed among foodstuff.

The indigene of Afiesere village, Ughelli North Local Government, Delta State said she operates a restaurant in Istanbul, Turkey but came to Nigeria to see her relatives and buy food items for her restaurant business.

In Taraba state, operatives on Thursday 29th Sept. intercepted 100 compressed blocks of Cannabis Sativa weighing 73.500kg, concealed inside animal feeds, while their counterparts in Ogun state on Saturday 1st October arrested a physically challenged drug dealer, Abdulrahman Mohammed, with 104kg of compressed Cannabis Sativa recovered from him. Another suspect, Ms. Safiya Bello, was also arrested in the Shagamu area of the state with 27kg of psychotropic substances.

Chairman/Chief Executive of NDLEA, Brig. Gen. Mohamed Buba Marwa, however, commended the officers of the agency for their resilience.

He charged them and others across the country to intensify ongoing offensive action against drug cartels and traffickers wherever they may be located in any part of Nigeria.

Share this on WhatsApp
Related Topics:National Drug Law Enforcement Agency (NDLEA)
Up Next