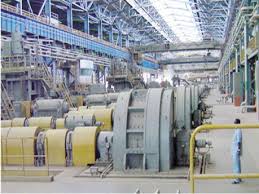 Manufacturers and experts have said privatisation of Ajaokuta Steel Company will yield better dividends than the facility being run by the government.
They maintained that government-run business had never turned out to be a profitable venture but one that was prone to corruption and waste.
As such, they canvassed the sale of the national asset but urged the government to do such in a transparent manner.
A business and investment consultant, Vincent Nwani, pointed out that the government was not supposed to run business.
He said, “Ajaokuta needs to be run as a business and not as a government agency or non-profit organisation. It needs to be transferred to the private sector for proper management.
“The steel mills in Japan and other places worldwide are not run by the government but by private companies and they are very successful.
“The pending court case on Ajaokuta should be resolved and the facility should be given to private investors in a transparent and competitive manner.”
Nwani emphasised that steel industry everywhere in the world was the bone of development.
“If our steel mill is well managed, it will service the local industry and save us huge foreign exchange spent on importation and there will be multiple benefits derived including job creation and economic development,” he said.
Another expert and a professor of economics at the University of Uyo, Leo Ukpong, agreed that a private entity would reactivate the steel company and run it successfully.
He said, “Government-run business has a history of corruption and lack of continuity in cases where another administration takes over and quickly abandons the agreement entered into by his predecessor.
“The demand for steel is very high both domestically and globally. This would serve as an incentive to any private investor who will see the prospect of profit and market in the investment.”
For the President, Manufacturers Association of Nigeria, Mansur Ahmed, it is important that the steel company is converted to a profitable entity and one sure way of doing this will be to involve private investors.
He stressed that the investors must be the right kind of private investors who could turn the facility into a profit-making one.
He said even if it was done with the involvement of the government on a public private partnership basis, the private investors must be given a free hand to operate, adding that such investors were usually many.
Ahmed said it was imperative this be done soon because there was a huge demand for steel in Nigeria.
Earlier, the former President, Nigerian Metallurgical Society, Prof Benjamin Adewuyi, urged President Muhammadu Buhari to ensure the completion of the steel complex during his second tenure.
ALSO READ: Naira has not been devalued, says CBN
Adewuyi who gave the advice in an interview with the News Agency of Nigeria said Buhari should ensure that the moribund steel company became operational in his second tenure to boost the economy.
He explained that the project when completed, arms, ammunition, and cars, among others, that were now being imported could be manufactured in the company.
He said, “Ajaokuta has the capacity to produce cars, arms for the military among others and can also provide massive employment for the youth.
“We are only deceiving ourselves that we are manufacturing cars locally. Without Ajaokuta steel functioning, we cannot manufacture our own cars.
“We have many brilliant youths among us that cannot carry out any innovation because we lack the materials they require, Mr President should revisit Ajaokuta Steel Company and kickstart the project.”

Osinbajo, others to attend 2020 MSMEs Awards