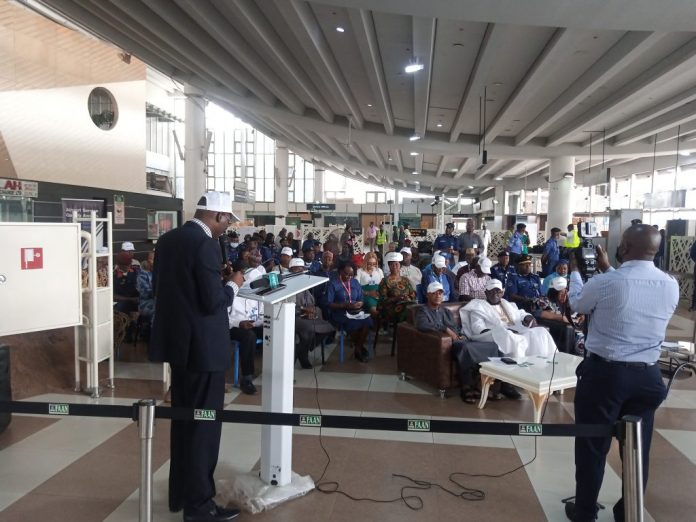 Yadudu, who was represented by the Group Capt. Usman Sadiq, Director of FAAN Security Service, said in his opening remarks on Thursday, that the move would definitely increase the country’s Gross Domestic Products.

”The project is planned to be operated under the Public and Private Partnership(PPP).

”The FAAN TAXI App is to enable air travellers to book online for a taxi to the airport and from the airport.

”It is also aimed at eliminating touting and analogue ways of operating taxi at the Airport as anyone could book the FAAN taxi at the airport and move just like other transport Apps.”

According to Yadudu, the project will improve safety, security and comfort and further ensuring development in Aviation sector.

“This is a good development. We fair changes naturally. Sometimes, when change occurs we will be proud of it. I am assuring taxi and commercial drivers that this will actually lead to laudable development.

“it is in furtherance conformity with international standard and will equally add to Gross Domestic Products of Nigeria.

“ This laudable project is as a result of careful planning, negotiation and some meetings of relevant stakeholders. I hope everybody will key into this project and work towards its success,” Yadudu said.

FAAN boss urged the commercial body to support the project`s sustainability and enforcement for the hope of generality of Nigerian people.

In his address of welcome, Mr Kabir Mohammed, FAAN Regional General Manager, North Central, said that commissioning of the App was a resolute action to move from analogue to digital at all airport in the nation.

Mohammed commended all stakeholders that had contributed in one way or another to the success of the project.

“Today, history has been made by moving from analogue to digital. This is just the beginning. We need your cooperation. We want to assure that Abuja airport is working very hard.

“ This is actually a new narrative brought in by the Federal Airport Authority of Nigeria, “ he said.

Contributing, FAAN Director of Commercial, Mr Sadiku Rafindadi, said the authority had started automation and would not go back.

Rafindadi added that MMIA would be the next to observe commissioning of the App then to be followed by Port Harcourt Airport and so on thought out the country.

“Today marks the first day of commissioning FAANTAXI App. We have been working for this quite a while by meeting the stakeholders. We are ready to move forward.

“Abuja is taking the lead and we are proud of NAIA. We are moving to Lagos, next will be Port Harcourt international Airport and then the rest of the airports.

“The major aspect of Aviation is for safety, security and comfort. With Nigerians behind us, we are moving forward. Automation indeed improves revenue, “ he said.

One of the drivers, who operates at the airport said the drivers were allowed to register their vehicles with the FAAN Taxi without any fee and expressed confidence that the project will help sanitise the airport.