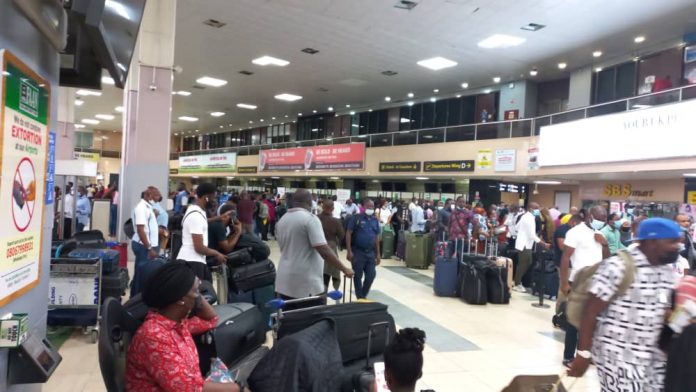 An academic, Dr Ufuoma Akpojivi has urged the media to imbibe the spirit of patriotism by projecting Nigeria positively to discourage irregular migration and trafficking in persons.

Akpojivi, a lecturer at the Pan Atlantic University (PAU), Lagos said this at the ongoing three-day training on “Ethical and Accurate Migration Reporting’’ held in Lagos.

The News Agency of Nigeria reports that the training was organised by the International Organisation for Migration (IOM) Global Migration Media Academy (GMMA).

According to Akpojivi, the media has contributed to the exodus of Nigerians abroad following the negative reports some journalists churn out on a daily basis.

In his paper presentation titled: “Development Communication and Migration”, he said the media had an influential role in shaping public opinion about the country and migration.

Akpojivi said the media narrative about the country was critical to national development as well as changing the battered image of the country.

He said that the media narratives always shaped the people’s understanding of a nation’s culture and beliefs with the language used.

“The media at some point highlights negative reports about Nigeria that people just want to pack their bags and leave the country by any means possible.

“There are so many wrong things happening in developed countries but you never get to hear about them. They tell you only nice things about their countries.

“So, journalists should begin to focus on the positives, write about positive events that could promote national cohesion and development,’’ he said.

Akpojivi also called on the government to enact deliberate policies that would address issues and challenges of migration to promote national development.

He said that the current trend in migration was motivated by the growing unemployment, attractive salaries abroad and pursuit of higher education and better health care among others.

Also delivering a lecture titled: “Culture and Migration’’, Dr Chike Mgbeadichie said that the quest for riches had eroded Nigerians’ cultural values, adding that, people were eager to migrate by any means possible.

“Today, the young people are constantly risking it all to migrate.

“The quest for riches and wealth has taken the centre stage and has erased the fundamental value systems of the different ethnic groups in Nigeria.

“This material culture has spawned a new generation of Nigerians who have lost all sense of value for their cultural ethos,’’ Mgbeadichie also a lecturer at PAU said.

According to him, the role of the media will be to keep pushing on the need for people to imbibe their cultural values to avoid migrating irregularly.

Speaking further on migration issues, Mr Charles Autheman, a lecturer at PAU, said the number of migrants around the world had reduced drastically compared to what was reported before now..

Delivering a paper titled: “Fake News and Misinformation’’, Autheman said only about three per cent of the world’s population in the last 20 years were migrants.