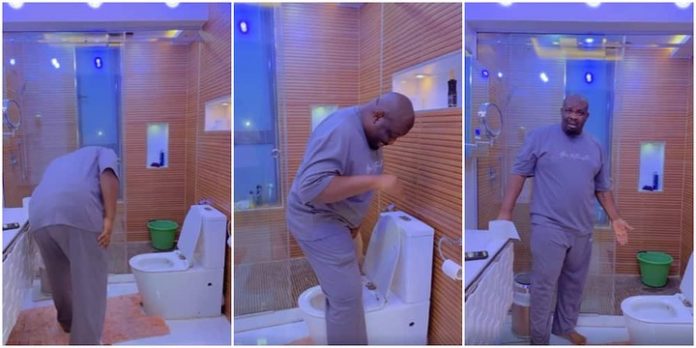 Don Jazzy is one of the celebrities who has reacted to the story of Nigerians who found snakes in their water closet.

This was after the viral news about a Nigerian Airforce personnel, Lance Corporal Bercy Ogah, who died shortly after she was bitten by a snake that hid in her toilet.

In a video on his Instagram page, the music mogul was spotted entering into his restroom while searching for where snakes could come in from.

According to Don Jazzy, the snake stories have got him paranoid. He added that he was told to pour some salt in the water closet before using it.

Don Jazzy noted that whoever doesn’t want to use salt should just find alternative ways to poo. The singer then tried different ways to poo by standing over the water closet while laughing at himself.

“Builders should stop connecting suckerways and septic tanks to the gutters.”

“My own be say this toilet paradise.”

“I swear this is getting out of hand.”

“Yes oo safety begin from us.”

“What will snake be doing in this kind of toilet?”