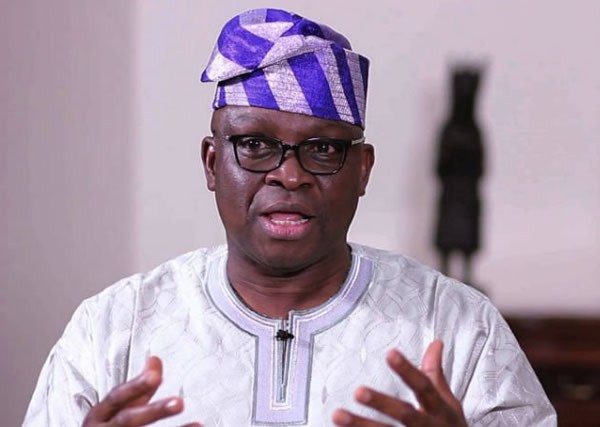 Share this on WhatsApp
Spread the love
Ekiti Gov. Ayo Fayose has been reported to the PDP National Executive Committee for the way he maltreats those members he perceives as his enemies in the state.
And the party’s executives are worried, following a motion by Senator Abiodun Olujimi, who represents Ekiti South, during the NEC meeting in Abuja on Tuesday.
The senator was said to have listed a lot of incidents in the state, including how some indigenes have been harassed and beaten by members of the PDP.
.
Dayo Adeyeye, party’s spokesperson, also confirmed the development while briefing journalists after the over six-hour meeting.
Adeyeye said the party would lose the 2018 governorship election in the state if Fayose was not cautioned.
ALSO SEE: Fayose for president, Wike as VP–impossible, says Wike
Fayose has imposed his deputy, Prof. Olusola Eleka, as the party’s governorship candidate for the election, and that decision didn’t sit down wel with many, imcluding certain members of the NEC.
The governor was also said to have unilaterally set age limit for the candidates of the party in the forthcoming local government election in the state.
And hes designated the Government House as the venue for the party’s primaries for the election.
Chairman of the National Caretaker Committee of the party,  Ahmed Makarfi, has also expressed worry over the matter.
“The chairman (Makarfi) said that certain actions were being taken on these issues in order to avoid catastrophic reactions in the forthcoming governorship election in the state,” said Adeyeye.
Share this on WhatsApp
Related Topics:2019 presidential electionAhmed MakarfiGov. Ayo FayosePeoples Democratic Party (PDP)
Up Next