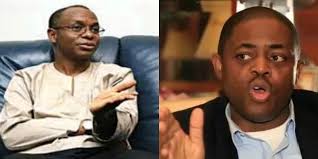 Governor Nasir El-Rufai of Kaduna State was engaged in a twitter fireworks with Femi Fani Kayode over the use of political power for economic gains of the north. While El-Rufai celebrated the economic advantages Alhaji Aliko Dangote, a northern businessman in Nigeria, has derived from the control of political power by northern leaders as the richest man in Nigeria, Femi Fani-Kayode fired back at the governor that a southern with the sort of patronage Dangote gets from the federal government would the richest man in the world. Fani-Kayode demonstrated that southerners are more productive.

The Tweeter fireworks between Governor El-Rufai and Fani-Kayode reads:

@elrufai: “The richest businessman in Nigeria is still Dangote not someone from Southern Nigeria, thank God for that.”

Femi Fani-Kayode: “Any southern businessman that received the kind of support that Dangote received from FG’s over the last 40 years would be the richest man in the WORLD today.”