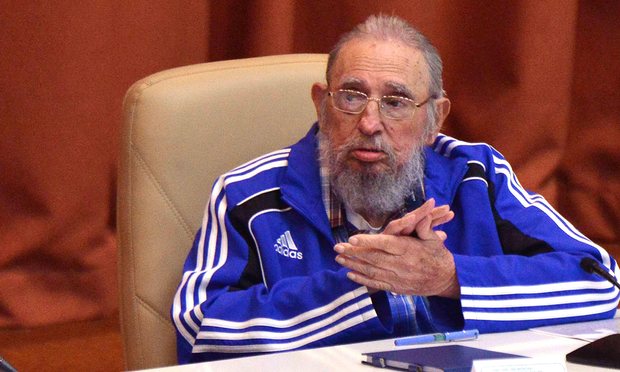 *As brother, others get re-election

Fidel Castro predicts own death
After suffering intestinal problem for the last 16 of his 89 years, Cuba’s strongman Fidel Castro is feeling the chilly hand of death. And he is now urging the Communist Party to keep the communist revolution’s vision alive after he’s gone.
“Soon I’ll be like all the others,” he said. “The time will come for all of us. But the ideas of the Cuban Communists will remain as proof on this planet that if they are worked at with fervor and dignity, they can produce the material and cultural goods that human beings need – and we need to fight without truce to obtain them.”
Fidel announced this to a group of politicians assembled after his brother, President Raul Castro, 84, was re-elected as head of the Communist Party in the party’s congress.
Raul has announced he is sitting pat till in 2018 when he will retire.
According to Fidel, time is approaching for a younger generation to take over.
However, the younger generation the communist superstar looks forward to isn’t around the corner yet.
Most of the senior leaders came back. Castro’s deputy. Ramon Machado, 85, was re-elected. Miguel Diaz-Canel, the 55-year-old favoured to take over from Raul in two years’ time, remained in his place but was not promoted.
At the beginning of the congress last week, Raul promised, from now on, leaders of the party will have to retire at 70.
While he called for sweeping changes in the management of Cuba’s economy, he said the next five years would be for transition, thereby suspending whatever reforms the party is mooting until then.
Fidel also noted that the next time the Congress will hold, in 2021, there will be a new leadership in place.
“This seventh congress will be the last one led by the historic generation,” said the former president.
President Barack Obama visited Havana in March, the first visit by any U.S leader in 88 years. He didn’t meet Fidel though.
An angry Fidel, who many believe has been mending fences with the U.S., warned after Obama left that Cuba remains communist, and won’t need America’s help.
The Cuban revolutionary has always resisted help. Born in 1926, Fidel at 27 took Raul along to launch their first uprising against General Bastita. He failed, was arrested, jailed, and later given amnesty.
He, however, headed for Mexico where he launched his second uprising that saw Bastita show a clean pair of heels.
Fidel became Cuba’s prime minister in 1959.
America, trying to overthrow his government two years later, sent CIA-trained Cuban Americans who landed at the Bay of Pigs for a mission that eventually flopped.
The fall of the Iron Curtain later forced the Fidel-led Cuba into a period of economic hardship starting from 1990. His health deteriorated, too.
He had to finally hand over to Raul in 2008.