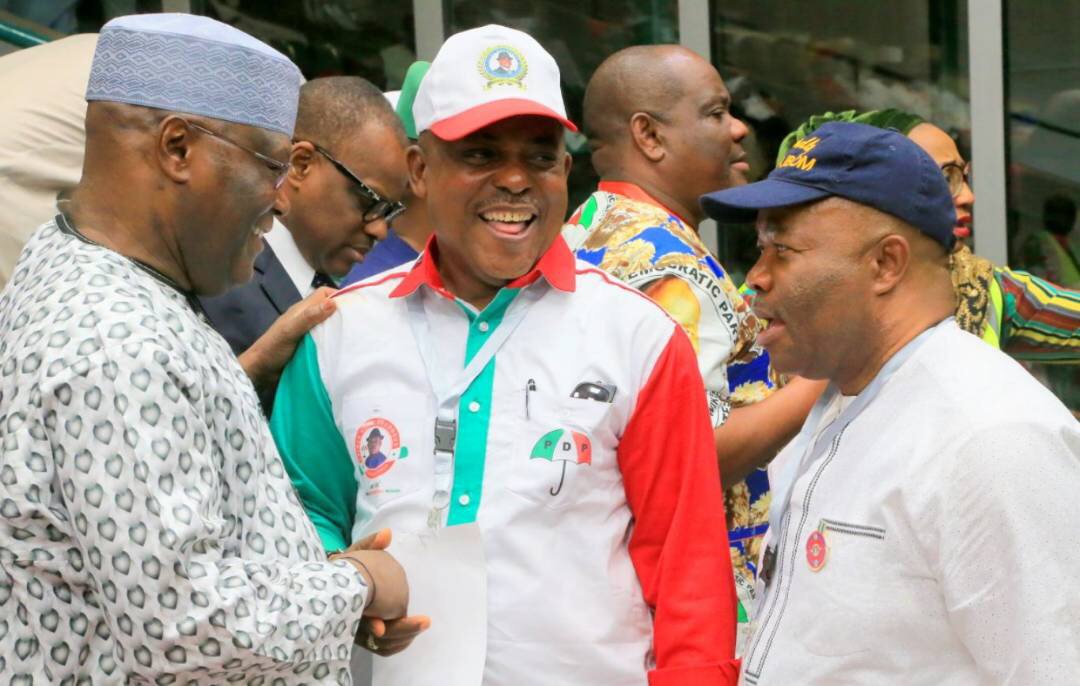 Share this on WhatsApp
Spread the love
Former Vice President Atiku Abubakar has called for unity amongs members of the PDP following the election of the party’s executives at its National Convention on Saturday in Abuja.
A press statement by the media office of Atiku congratulated Uche Secondus as the new national chairman of the PDP and other elected officials of the executive. It further stated that the immediate challenge before the newly elected national officials of the PDP is to run an all-inclusive administration where various interests within the party can find accommodation.
According to him, Nigerians are looking up to the PDP for unity “because it takes a united and coherent PDP to sack the APC government in 2019.”
“Our great party, the Peoples Democratic Party is, again, at the threshold of an historical moment. Just as we mobilized to put an end to prolonged military rule in 1999, the people of Nigeria at this moment look up to us to rescue the country from the mis-government of the APC,” the press release stated in part.
He advised there should be no no victor and no vanquished.
ALSO SEE: Atiku has become a laughing stock – Ajomale
“Our paramount attention should be focused at sacking a government that deceived the people of Nigeria into power by promising our youths three million jobs annually, only to deliver three million job loses annually, a government that is repeatedly living in denial of its commitment to restructuring,” he said.
“As members of the PDP, we must take pride in being able to hold a national convention and in so doing live up to the bill of being a truly democratic political party. Our major opponent has not been able to achieve this feat and I join millions of our party members to congratulate the Ahmed Makarfi-led national caretaker committee.
“I understand that there are complaints and grievances from many of the co-contestants in the congress. I am aware that the PDP has a mechanism for addressing such complaints and it is important that such avenues of redress are made available for members to explore without let or hindrance.”
Atiku defected from the APC two weeks ago, following his grievance over how the ruling party sidelined him, and the fear he might have no chance contesting the 2019 presidential election if he stayed in the party.
Share this on WhatsApp
Related Topics:former Vice President Atiku Abubakarnational conventionPeoples Democratic Party (PDP)Uche Secondus
Up Next