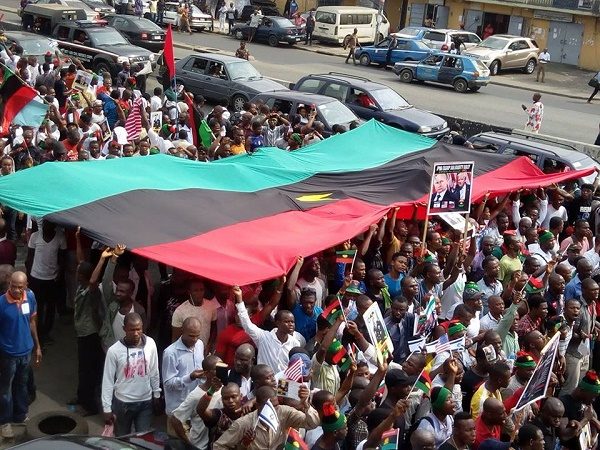 Suspicions are beginning to abound over the violent activities of the Nigerian Army in the South East. Several leaders from Igboland who spoke to National Daily on condition of anonymity expressed perturbation why President Muhammadu Buhari suddenly ordered Operation Python Dance II in Abia State over the activities of Indigenous People of Biafra (IPOB), without corresponding Tiger or Lion Dance over the invasion and killing of indigenes and destruction of property in, rural communities by Fulani herdsmen across Nigeria.

They contended that the Nigerian Army show of force against members and leader of IPOB have become worrisome, essentially, when the youths and IPOB leader have not engaged in arms struggle or been linked with arms deal.

The Igbo leaders decried that the Army is deliberately scheming to provoke the Igbo youths into violence to have excuse to destroy Igbo land and cleanse the Igbo nation from the surface of the earth; an operation, they said, will be tantamount to genocide.

thousands of the Indigenous People of Biafra (IPOB), members were reported have mobilized themselves from different South-East states traveling to the residence of their leader, Mazi Nnamdi Kanu, in Umuhia, Abia State, in tippers, buses and cars to protest  the siege of the  Nigerian army in the zone. The mass movement of the Igbo youths into Abia was said to have started after Soldiers were seen with armoured tankers in front of Kanu’s home.

The Igbo leaders were of the view that such hostile relationships between the Nigerian Army and Igbo youths may trigger violent reactions from both sides, providing the Army an opportunity to annihilate a generation of Igbo youths in the South East.

They also accused the President of plotting the declaration of state of emergency in the South East through instigating violent uprising in the zone.

Meanwhile, National daily investigation revealed that the Operation Python Dance II may be related to forestalling of violent outburst in Igbo land as October 1 approaches. Thus, the Army found it imperative to be pro-active in preventing violent outburst that could be devastating to national security and national integration of the country.

The Igbo leaders, however, did not admit this submission. They argued that IPOB never issued any threat against October 1, recalling that northern youths were the ones that issued quit notice to Igbo nation to vacate their territory before October 1, and therefore, the Operation Python Dance II supposed to be responding to music drums in the North and not the South East citizens whose security and business interests are under threat from the North.

These leaders further raised the suspicion that the Operation Python Dance II may be working towards intimidating and frightening Igbo youths into cowardice to weaken their capacity for reprisal responses when the northern youths eventually descend on their brothers and sisters anywhere in Nigeria. They accused the Army of assisting the North to fight ethnic war against the Igbo nation.

Meanwhile, it is apposite that the Army operation in the South East should not be misconstrued by stakeholders in the Nigerian project from that clime in such a way that the Nigerian military will be discouraged from their duties of protecting the territorial integrity if the country.

However, it is germane that President Buhari ensures the Army do not go beyond limit or unnecessary declare onslaught on the people in the South East.

In the midst of the ugly episode, Senators from the South East, on Tuesday, lamented the current military show of force in Umuahia, Abia State.

The Igbo Senate caucus Chairman, Senator Enyinnaya Abaribe, in a statement, condemned the military invasions of the residence of Nnamdi Kanu.

“We had hoped that our ongoing engagement with the group be given a chance, and here we are, with a hurried military action deep into a highly populated area with high propensity for casualty, which occurrence would rather escalate the already tense situation.

“It is more worrisome that the Military’s operation ‘Python Dance 2’ restricted to the South East in a peace time, has no doubt fouled the environment and sent strong signal that the region is under siege, which should not be so in a democracy.

“We, therefore, urge extreme caution, and advise the military to de-escalate the situation and choose the best operational modus that will not only guaranty the safety of Nigerians, but also enhance national unity,” the Eastern Senators declared.

They maintained: “Nigeria is not at war. People are only exercising their constitutional and universally guaranteed rights. So far they are carrying on in a manner that has never given room to violence which could warrant a wholesale military expedition.”

More so, President General of Ohanaeze Ndigbo, John Nwodo, was of the view that Nigeria does not need such deliberate and proactive escalation of tensions and crisis.

He advocated that government should “adopt civilized and established practices to resolve our democratic and security challenges rather than resort to the use of brute force in resolution of issue of self-determination.”

“Ohaneze Ndigbo considers this development as unfortunate.  We believe that it is a deliberate invasion of a quiet homestead, an act of provocation and a continuing policy of intimidation.

“Ohaneze Ndigbo is left with no alternative than to conclude that this is a containment policy aimed at the South East to intimidate our people from freely expressing their anger and angst at their marginalisation and treatment as second class citizens,” Nwodo declared.

He contended: “In a democracy, the level of disenchantment expressed by the people of the South East of Nigeria ought to have provoked a serious dialogue between our people and the Federal Executive and the Legislature.

“History teaches us that the continuous use of force to silence dissent and free speech will only accelerate the growth of dissent and dissatisfaction. Fundamental Rights of freedom of expression are critical for a successful democracy.”

Nwodo said claims that the operation is aimed at checking increased crime rate in the region had no evidence, protesting: “Python dance one was used to extort money from our people.”

He narrated that the first operation embarked upon by the military never addressed the issue of crime; contending that, more so by Police record, the South East is not the worst in crime rate in the country.

“Instead, it witnessed reckless and indiscriminate murder of self-determination agitators in Asaba, Aba, Nkpor, and Port–Harcourt numbering up to 191 by the estimates of Transparency International and shattered public confidence of South Easterners in the Nigerian Army and police,” Nwodo highlighted.

Meanwhile, the three-day curfew declared by Governor Okezie Ikpeazu of Abia State in Aba, on Tuesday, is still in force.

Governor Ikpeazu had in a statement on Tuesday, expressed concerns over the military operation tagged, Operation Python Dance II in the state and other south-eastern states by the Nigerian army. The curfew starts from 6.00pm to 6.00am on Tuesday and ends on Thursday.

Nigerian Army have constantly refuted accusations of violation of human rights in the South East, postulating that their activities are strictly security routine exercise.