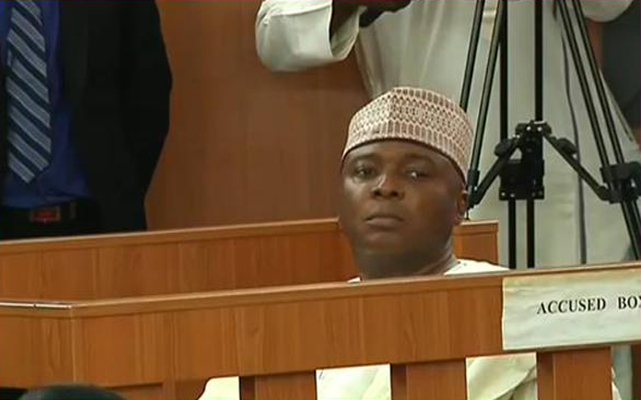 A witness in the ongoing trial of Senate President Bukola Saraki has told the Code of Conduct Tribunal that Mr. Saraki made foreign funds transfer of over $3 million while he was governor of Kwara State.

The witness, Nwachukwu Amazu, a banker with the GTBank said Mr. Saraki made several transactions, including a transfer of over $73,000 from his dollar account, maintained with the GTBank to his foreign account in the American Express Service Europe Ltd.

He said the purpose of the transfer was to fund a foreign credit card, belonging to the American Express Bank and owned by the defendant.

When asked to explain the mode of operation of Mr. Saraki’s foreign credit card, the witness said he did not know how the card operates.

“I don’t know anything about the card, except if I explain with my knowledge of the GTB credit card in the Nigerian perspective,” he said.

He also said another sum of £632, 411.7 was also transferred for the defendant to Fortis Bank in London.
He made several other testimonies of funds transferred through Mr. Saraki’s domiciliary accounts to foreign accounts belonging to the Senate President abroad.

Earlier, the Tribunal chairman asked the defendant if he needed water and gestured to offer water to Mr. Saraki, inside the dock.