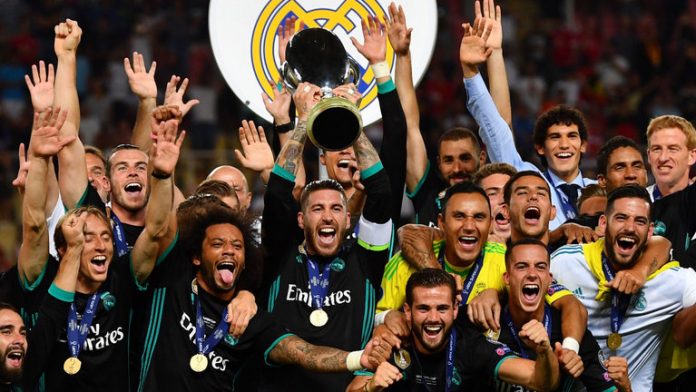 Gareth Bale looks to have agreed a deal with Real Madrid to let him leave in this summer’s transfer window after a meeting between his agent and club president Florentino Perez.
This is according to Diario Gol, who add that Manchester United are prepared to pay €100million or more for the Wales international as Perez accepts his demands.
Bale would be a fine signing for United and speculation has been hotting up that the 28-year-old could be on his way out of the Bernabeu following Saturday’s Champions League final.
Despite only starting on the bench, Bale came on in the second half and scored twice to deliver Real the trophy in their 3-1 win over Liverpool.
Bale then told BT Sport right after the game that he wasn’t happy at his lack of playing time for Madrid this season and that he’d have to talk to his agent and think his future over this summer.
It now seems these discussions have taken place, with Diario Gol suggesting everything is agreed between all parties and that Los Blancos are simply waiting to announce it.
However, this may have to wait until they manage to bring in a replacement for Bale, according to the Spanish outlet.
United finished 19 points behind Manchester City in 2017/18, lost the FA Cup final, and exited the Champions League at the last-16 stage.
A signing of Bale’s calibre could make all the difference for Jose Mourinho’s side in their bid to finally win a major trophy next year.