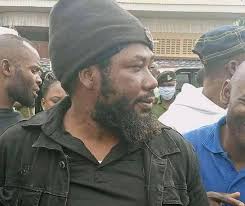 One of the influential members of the late Terwase Akwaza AKA Gana gang, who simply identified himself as Aondehemba has revealed how the late gang leader acquired his powers.

While reacting to the killing of Gana last Tuesday at a security checkpoint mounted by the Army on the Gbese-Gboko-Makurdi road, Aondehemba said Gana had supernatural powers derived from his 12 years old daughter whom he buried alive 11 years ago in his village in Gbitse.

According to him, late Gana had a premonition that he was going to die and handed over all his powers to the next person to him in the gang before coming out to embrace the amnesty at the Akume Atongo stadium in Katsina-Ala.

“I was among the five gang stars that disappeared in the convoy when the army stopped us in Gboko, our vehicle was following the official car of the Local government chairman that was conveying Gana to Makurdi

“Gana could not disappear because he had already handed over his powers to the second commander before embarking on that ill-fated journey to Makurdi.

“We warned him not to come out, we told him that the said amnesty was a ploy to get him, he agreed with us but said he has made up his mind to surrender and that he was tired of staying in the bush.

He said that Gana was an empire as he had trained over 200 of them spread across Benue North East and some part of Taraba “it is a battalion, we are many and have a very strong network, Gana was a leader that cares so much about us.

“On that very day, he assembled us in the morning in the bush and addressed us, he directed us on what to do if he did not return alive, he told us that if his coming out is a set-up, the battle should continue but if it is with genuine intentions, he will want us to lay down our arms,” he said.