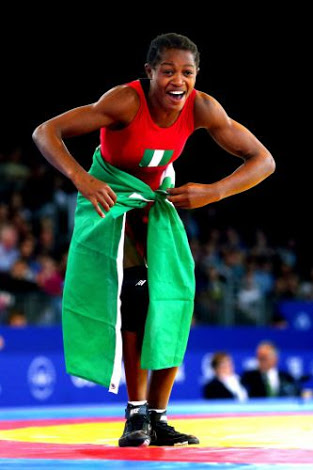 Odunayo Adekuoroye is ranked No. 1 in Africa and won gold in the 2014 Commonwealth Games and bronze at the 2015 World Wrestling Championships in the U.S. Adekuoroye is now the first woman from Nigeria to march into the gold medal final at Senior World Wrestling and Winner of Sports woman of the year 2017.
Adekuoroye is a Nigerian freestyle wrestler. She competed in the women’s freestyle 53 kg event at the 2014 Commonwealth Games where she won a gold medal and at the 2015 World Wrestling Championships where she won a bronze medal. National Daily Esther Egbe spoke with her recently.
Can you tell us a little about your background?
Odunayo: I’m from Ilutuntun, Okitipupa, in Ondo state. My parents gave birth to a total of seven children consisting of three boys and four girls. I’m the youngest.
Since you made the choice to go into wrestling how has it been, what challenges did you face back then and what challenges do you still face now?
I don’t think I faced any challenges when I started because it was like a child’s play and I was much young. When I got deeper into the sports. That was when my coach came to my rescue.
After a year and some months, there was nothing at home and to attend training and school became difficult. But glory be to God; he positioned a ‘Joshua’ to help me who is my coach. Coach Purity Akuh came to my house and told my parents to hand me over to him for training. promising to foot the bills of my school as well as adopt me as his daughter.
Currently, the challenge I face is funding. I’m currently at the peak of my career. I want to wrestle but there is no fund.
Why did you settle for wrestling, not football or any other sport?
During my secondary school days, I was in athletics before but I was dropped in a grassroots competition. The wrestling coach of Ondo state saw me in tears and asked why I was sober. I explained everything to him and he promised that I’d attend the same competition which the athletics team sidelined me. Immediately, I followed him, trained hard in wrestling and eventually won a gold medal.
After the event, I ran away telling him I had no interest since I’d done what was on my mind which was the trip. But Coach Purity kept persuading me. Three weeks after intensive thinking, I came back to train and attended the Sports Festival. I won a bronze medal for Ondo state and was given money. I decided to stay in wrestling because of the money, This could bring something to our table.
I thought I wanted to help my parents, but I never knew I was helping myself and the next generation.
What has been your greatest moment in the sports and your saddest moment?
My greatest moment, for now, is the 2014 Commonwealth Games in Scotland where I won a gold medal and my saddest moment, is the 2016 Olympic games.  But I believe what my coach told me. After the Olympic games, he said ”Jacob (in the Bible) served  for seven  years to have Rachel as his wife but after the seventh year of serving his master, Leah was  given to him that was not  his dream.” He (Jacob) needed to serve for another seven years to have Rachel. He (coach) said he needed to serve for another seven years for my dreams to come true.
What do you need to get an Olympic medal?
I think in Rio, God had the power to say, ” My daughter take a medal.” But He just wanted everything to be done right. Like what my president has always said about funds: we need to attend competitions; we cannot always depend on physical efforts and national competitions alone. We need to go out.
Other countries spend funds in sports but not in Nigeria. My friend in India told me that now I am rich I am in money, He asked me how much my government has given me with this silver medal. But I was just laughing and didn’t know what to say because really, I don’t know. For example in India, if you win a bronze medal, they’ll give you a lot of cash.
So I believe with funds, all is in the hands of God Almighty and there is no yoke God can’t break at the next Olympics.
I must emphasize, Nigeria has to do everything right because the team cannot continue to train without attending competitions. Most of the fights we lost were due to non-attendance of tournaments. The girl I wrestled in the semi-final of 2017 World Championships is the same girl I fought last year. Immediately I saw her, I had confidence that the game was settled and I was ahead of her. The Federal Government has to fund wrestling, we are ready to be the best if we get encouraged.
Tell us about your experience in Paris World Championship. You almost did not travel but you ended up recording a historic feat?
It was a good experience and it gave us confidence that we are getting there. Very soon, Nigerian wrestlers will be at the top. I strongly believe.
How long have you been into the game?
I have been  wrestling for ten years now.
How do you feel about the recent award?
I am so very happy about award, it one of the things that will keep me going.
What is your advice for young ones?
I will love to advise the younger ones thinking of going into Wrestling. They should never give up on their dreams.
How did your parents take it?
My parents don’t really support me because I am so skinny and they love me so much they don’t want anything to hurt me