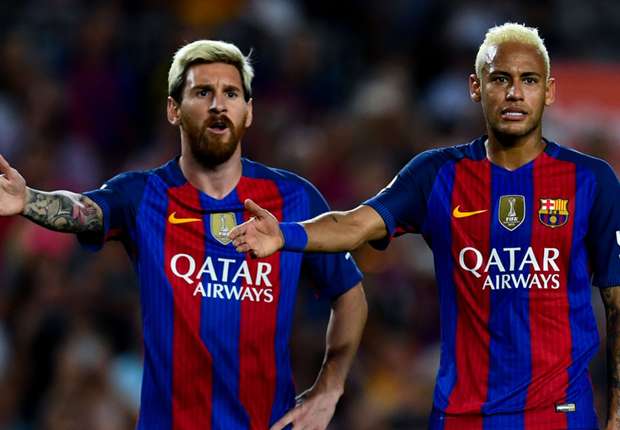 Yeah, there, in Barcelona, he’s earned it. The king of all the greats. They’ve called him GOAT, Greatest Of All Time. Yet, I believe he could just truly be GOAT-WEB, Greatest Of All There Will Ever Be! Ediale Kingsley writes.

He came through from the ranks, under the shadows of players like Ronaldinho and others. Leo Messi wasn’t gonna chicken away to EPL or Ligue 1 or wherever. He was there to be himself, he would go ahead to create his own style, not be a dancing entertainer like the heavyweight Ronaldinho.

Ronaldinho was class. Messi became a god. He’d go on to earn his numbers 10 jerseys for club and country.

And then it was time for us to meet Neymar Jnr. He came, Neymarized and grew. He was a fashion, a worthy successor, a prince under tutelage from the King of them all, a whiz kid…

Like that Nigerian Wizkid, he decided to float his own label…far away from the shadows of a Banky W.  The only problem here is unlike the musician Banky W, Messi’s shadow cuts across the globe.

However, it is his right to have his shine the way he deemed fit. While it is novel and noble for Messi to stay, outshine, outclass, outdo and be coronated under the noses of Ronaldinho. It’s yet completely fine, for Neymar to decide the way he chooses to seek his coronation.

Neymar has all the rights in the world to be the best in the world. Irrespective of what he says after months in France. There will be no denial that Messi wasn’t nice to him.

Messi treated him like a friend, apprentice, prince and a son. Neymar has said so in his final farewell message. Even if he makes a u-turn to deny his speech. History has it in YouTube tapes, how in many situations, Messi looked the other side for Neymar to take Penalties and set pieces.

Messi sacrificed these giveaways for hat tricks, personal honors, and Pichichi awards. When Neymar scored or did well, Messi never felt too big to jump on him in celebration.

And as Neymar left the training grounds to go pick up the £222m cheque for his Barca masters. Messi like a true friend paused training, walked him off and wished him well.

When he was announced a PSG 10, Messi sent him an Instagram pat on the back.

Barcelona fans must look beyond how Neymar chose to exit the club. They must bid him farewell like the king as done. They should also wish him well.

Although, Barca fans would have wished Neymar attained a Barcelona Legend status. Yet, the footballer has made his choice. And that doesn’t make him less in terms of quality. Only that, it makes him less sensitive.

May times favor Neymar, may he find the success he went to seek in PSG. But may our own King who was able to outshine his predecessor and successor, shine for ever.

While the media spotlights on Neymar for this expensive move. The spotlights should actually be on the remarkable Messi. Who came and succeed his predecessor, yet couldn’t be succeeded by the provided successor.

Kylian Mbappe or Eden Hazard can now proceed to Barcelona and sit beside the throne and become the prince. They (anyone of them) have shown prowess, they should go to La Liga and accept the challenge.