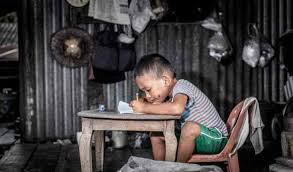 A new research has revealed that children from low-income backgrounds, where parents have a low level of education, have weaker brain activity and are more likely to be distracted.

The Lead researcher, Prof John Spencer from University of East Anglia’s School of Psychology and his team studied the brain function of children aged between four months and four years in rural India.

They compared their results with children from families in Midwest America and found that children from lower-income backgrounds, had weaker brain activity and were more likely to be distracted.

“Each year, 250 million children in low and middle income countries fail to reach their developmental potential which shows the growing need to understand the global impact of poverty on early brain and behavioral development.”

Spencer added that “Previous work has shown that poverty and early adversities significantly impact brain development, contributing to a vicious cycle of poverty. But few studies have looked at brain function early in development.

“We wanted to find out more about the functional brain development of children born into poorer backgrounds — to see why many do not reach their full potential.

ALSO READ: You urinate more than once at night? Study says something is wrong

This work is the first step in intervention efforts designed to boost early brain health before adversity can take hold.”

The study considers factors such as parental education, income, caste, religion, the number children in the family, and economic status.

The research team found that the children from families with low parental education and income showed weaker brain activity and poorer distractor suppression.

“Although the impact of adversity on brain development can trap children in an intergenerational cycle of poverty, the massive potential for brain plasticity is also a source of hope”, Spencer said.