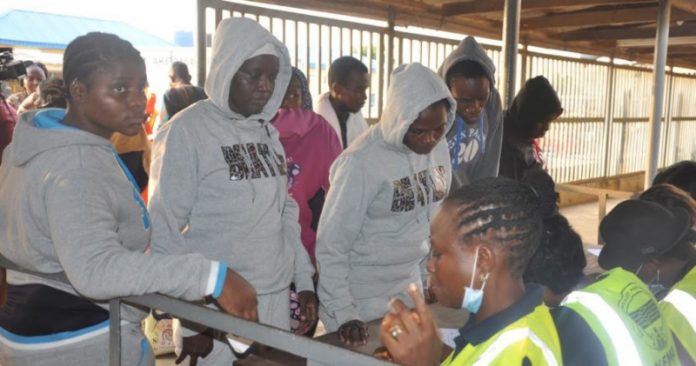 Migrants like Mary came back home with thanksgiving for surviving an experience that claimed the lives of many.

But numerous others continue to make the treacherous journey every day, travelling from northern Nigeria through the Sahel to Libya as recession, rising unemployment and a plummeting currency value make life unbearable.

The latest deportation of about 161 Nigerians from Libya last month brings to fore the plights of Nigerians trying to cross the Mediterranean Sea, using war-torn Libya as launch pad.

As there is no clear or stable government in Libya, Nigerians, it was gathered are being treated like commodities by rival militia groups in Libya. These militia gangs desperately want to keep them in Libya as they are profiting from them.

National Daily gathered that the ladies among the immigrants are forced into prostitution by cabals who preyed on their vulnerability.

Mary, who was one of the 161 Nigerian immigrants deported recently from Libya never imagined she would ever step foot in Nigeria again.

35-year old Mary from Delta state said she left the shores of Nigeria in 2010 with high hopes of crossing to Europe. Mary said she met a “burger” (trafficker), a woman, who promised to take her along for the journey for a N30, 000 down payment.

According to her, she left in company of other Europe-hopefuls, mostly young girls with few men, travelling through Ghana to Sabha, in Libya. The journey took them four days.

Sabha, a city with a large population of migranOAU suspends student union activities770km to the south of Tripoli and is the capital of Libya’s expansive southern Fezzan region. But more importantly, it is the hub of the country’s smuggling and human trafficking network.

Mary said she had hardly breathed the air of Sabha, when the traffickers who facilitated her journey “tranque” (kidnapped) her, a popular method of getting migrants to pay more.

She was held for days, beaten and sexually molested, not by Libyans this time but rather by black Africans who demanded she must work for them. She was eventually forced prostitution, claiming she owed them $5,000.  And until she pays the full amount, she would remained their prisoner.

“I was promised safe passage to Europe, so I started sleeping with men in other to raise the money, not just to pay the $10,000 demanded by my handlers, but also to pay for my passage to Italy.”

She said she had been in Libya for four years, still hoping to cross the Mediterranean when she was arrested in company of other girls who had also been stranded and taken to prison.

That would be her home for the three years; detention facility that she said was best described as hell. It was her journey into the belly of the beast.

Mary, is just one of the lucky few, many have died trying to cross to Europe, and more still remained incarcerated in prisons in Libya and other North African countries.

Today, uncertainty surrounds the fate of Nigerians still trapped in Libya as they are at the mercy of the various warlords who would not hesitate to kill them.