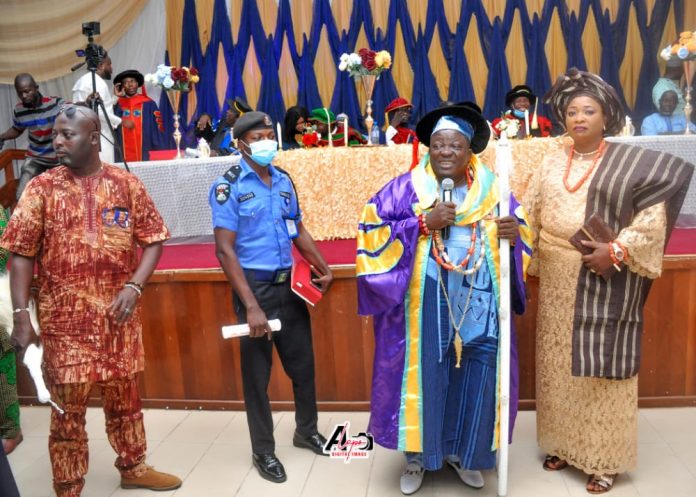 Reacting to the honour, Oba Khalid Olabisi called on other royal fathers to continue to spread the kind of unity that will bring progress and development in the country, noting that as custodians of tradition and culture of the people, royal fathers have a big role to play in ensuring unity in the country.

The monarch also charged the graduating students to be active in their various chosen fields and be productive. “It is a time to be active in your businesses, in your profession and prepare for life after retirement. You are a youth because you are vibrant and can contribute immensely to the development of the community and the countrywomen. Do not sit down to cause pains and mayhem to people”, he advised.

The monarch, who identified youths as the engine of growth and development, urged them to specialize, stay focused and grow.

“Being youth is not a profession. Some people think that when you are a miscreant and exhibit the notorious actions that you are a youth. But that is wrong.

Being youthful, he said, “is to be productive at a young age and not a time to be misused or indulge in all forms of crimes and delinquencies.”

Earlier in his remark, Akakpo Ablamvi Abraham Secretary General of IBLT described Oba Khalid Olabisi as an outstanding tradition ruler and a great philanthropist who has contributed immensely to development of not just his domain but also to the country.

“Oba Khalid is a man of peace and has been preaching peace. Without peace, there will be no meaningful development.

Abraham expressed satisfaction with the peaceful atmosphere in Saki town, praying that he hope other towns and community will learn from Oba Kahlid and also promote peace in their various domains.

He said that “all of us have come together to confer this rare title on you and we pray that this tree you stand for will continue to provide progress to the people of this country and beyond.

Institut Superieur Bilingue Libre du Togo (IBLT) was established in 2010 to contribute through technical and professional training and scientific research, to the realization of expected results aimed at by African States.

For decades, language of instruction and differences in education policies continue to breed disparities and constitute barriers to intellectual advancement and the march to African integration.

IBLT is bridging the gap by provision of English speaking programmes of instruction.